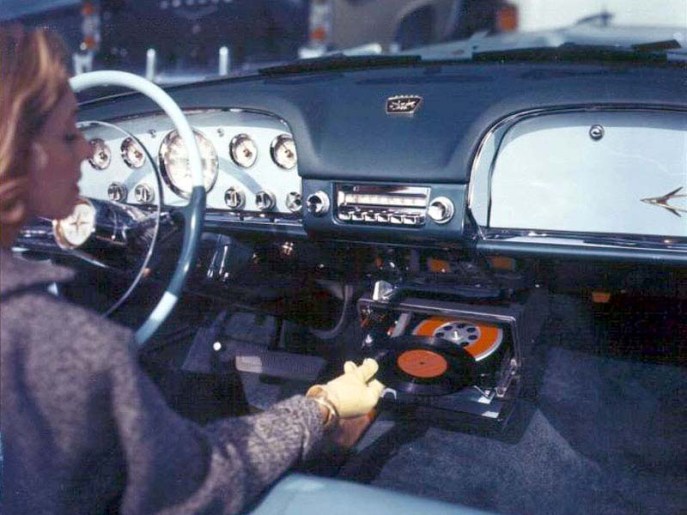 Innovation was the name of the game in the 1950s. The decade was also a time for the always anticipated family vacation and long road trips. It was on one of these trips that Dr. Peter Goldmark, head of CBS Labs, found inspiration for a novel idea from a question thrown out by his son.

‘Dad,’ Peter suddenly blurted out. ‘Why don’t they have adventure stories on the radio? Something you can put on yourself. This stuff can be so boring.’

The question stuck in his head and soon he went to work. Goldmark invented the Highway Hi-Fi – an under-the-dash ‘ultra microgroove record turntable‘ designed specifically for the automobile (and all the challenges of the American roads.)

I started to wonder how much information one can put on a small record for use in a car without a changer. The answer, it turned out, is easy to figure. To give us forty-five minutes of playing time on a side, as much content as both sides of an LP, and to give us a record small enough to fit with its mechanism inside the glove compartment, the record would have to be seven inches in diameter and would have to revolve at 16 2/3 rpm, one-half of the LP speed. In addition it required almost three times the number of grooves per inch as did the LP.     – Dr. Peter Goldmark

Goldmark chose to approach Chrysler with the prototype:

We all piled into one of the executive cars, which had been outfitted with one of my sets. Lynn Townsend, who later became president of the auto company, sat in back with me while the then president of Chrysler drove. The executives gave the tone arm the same test as before-over cobblestones, around curves, over washboard roads, slowing down, speeding up, even emergency stops. The jolts were incredible. But so was the record player. Nothing could stop it from carrying out its appointed mission…

With music filling the air, the president wheeled the car into the company garage. Townsend turned to me and said, ‘I must have it for the Chrysler.’ Everybody else agreed and chanted, ‘Yes, we must have it.’    – Dr. Goldmark

Chrysler featured the unit in their automobiles for the 1956-1958 model years. The records for the system were manufactured exclusively by Columbia Special Products. The Boxed Set of records that came with the Highway Hi-Fi contained an eclectic mix of music and drama. The set contained:

Dr. Goldmark felt that the loss of consumer interest in the Highway Hi-Fi ‘lay in the fact that Chrysler and Columbia Records failed to do proper marketing by not advising potential customers how to obtain additional records. Dealers failed to stock them, and little or no attempt was made to see that they did. Without this stimulus to buying, the car buyer didn’t order the optional record player in the numbers…envisioned.’ The price for the Highway Hi-Fi was also a bit exorbitant – nearly $200 (over $1,700 today). (source: Consumer Reports) 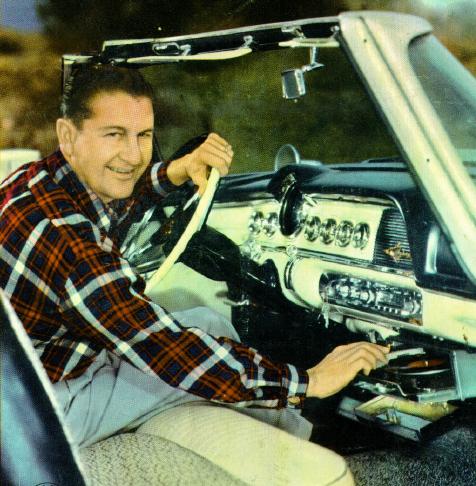 In 1958 the Dutch electronics company, Philips, introduced the Philips Mignon to the European market. The Mignon was an automatic record player designed for use in automobiles as well. Unlike the Highway Hi-Fi that required the long-play 16 2/3 ultra-groove records, Philips’ record player played standard 45rpm discs.

Even though one could just slip the record into the player and have it automatically eject when the content was over, changing the disc every few minutes was not only tedious, it was also a dangerous distraction for the driver. Despite these inconveniences, the Philips Mignon stayed in the market until the late 1960s. Philips offered the Mignon in the States via Norelco.

George Harrison had a Philips Mignon record player fitted to his brand new 1964 Jaguar E-Type 3.8. (image via The Art Of Sound)

In 1960 Chrysler decided to offer a less expensive under-the-dash record player – The RCA Victor AP-1 aka Victrola. It cost $51.75 ($410.47 today) and played standard 45rpm records. The Victrola also held 14 records and could play for 2½ hours continuously, if extended play 45s were used.

After testing both the Philips Mignon and the RCA Victrola, Consumer Reports decided that the Victrola ‘was, overall, more satisfactory than the Norelco “Auto Mignon,” as a means of bringing self-selected music to the lonely motorist.’ Despite the advantages of the Victrola, RCA decided to discontinue production after the first model year.

So, why did the least favorable of all three automobile phonographs end up having the longest life on the market? It’s clear that the Highway Hi-Fi was the best engineered and the most high tech. The Victrola offered the convenience of standard play records and less interruption compared to the Mignon, yet it had a shorter market life than the Highway Hi-Fi. What the Mignon had that the others did not was availability. Both the Hi-Fi and the Victrola were auto specific. The Mignon was available for installation for most car brands – the other two were only available in Chryslers.

In 1981, Philips (in a collaboration with Sony Electronics) introduced the digital compact disc (CD) to the world on the BBC television program Tomorrow’s World. This would signal what many thought to be the end of vinyl recordings all together – and at first it looked inevitable. But, in recent years music lovers have created a comeback of sorts for the rich sound and the quirky pops of the analog record.

Still, don’t expect to see an attempted reintroduction to the automobile phonograph. That idea will forever remain a novel ‘cultural addition to (the) American autointoxication’ of the mid 20th century.

Perhaps more than anyone else, Raymond Lowey was the man whose designs define mid-century America. From planes, trains, and automobiles, to the iconic corporate logos that resonate to this day – Lowey’s creations shaped the American cultural identity in the 20th century. Coronare Modestus Faust at Faustian urGe blog published the post below in 2011. While a lot of attention is given to the classic 1946 Albert Frey designed Loewy House in Palm Springs, CA, the last part of the post presents some of the industrial and graphic designs that will probably be very familiar – yet this is the first time you’ll hear the name of the man who dreamed them up. Great trivia to throw out at the next gathering of friends and family.

Warm greetings to all on this day when tradition reminds us to take time out and celebrate the good things/people in our lives. Thanks for taking time to visit this tiny space on the world-wide-web to recall the stuffs of yesteryear. While it seems that all things change – sometimes quite remarkably – some things will always stay the same: like the human needs of food, shelter, and love. Folks who have any or all of these things should treasure them, but also take a moment to think of those who do not.

Built in 1963, toured in 1966 by DC Comics licensee ALL STAR Dairies and believed to be the earliest custom car in existence, used as an officially licensed Batmobile, one of only two known designs used as real Batmobiles during that era; now restored to full Batman glory and will cross the block at Heritage Auctions Dec. 6.

To read more about this fab car’s wild ride since its creation click here.

For decades nothing has said American satire like MAD magazine. If you’re one of those folks who’s a fan/collector of the mag, and you’ve stashed away that extra change over time hoping to get that elusive first issue, you have a chance this weekend. 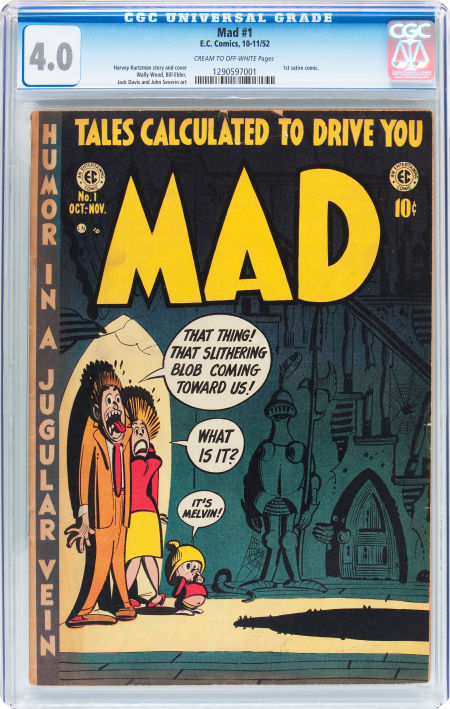 Heritage Auctions is offering MAD #1 (EC, 1952) for bids until Sunday, November 16 at 04:00 PM CT. This historic issue features the top story and cover by Harvey Kurtzman. With inside art by Kurtzman, Wally Wood, Jack Davis, John Severin, and Bill Elder ~ Legends All. The go-to collector’s reference, Overstreet 2014, values the comic at $834.00. The current leading bid is $332.60 (with the Buyer’s Premium). So, it looks like someone may have a great chance to get a good deal on this piece of mid-century print history.