It’s kind of strange – the original concepts seemed to make videophones so appealing. Now that we have such things, not so much. Perhaps it’s not the videophones themselves but rather the people with whom we have to connect. 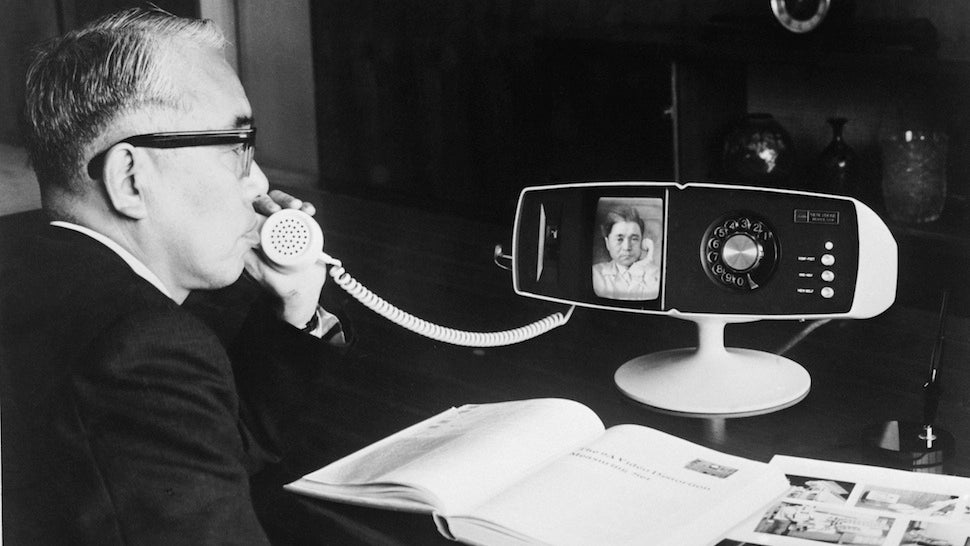 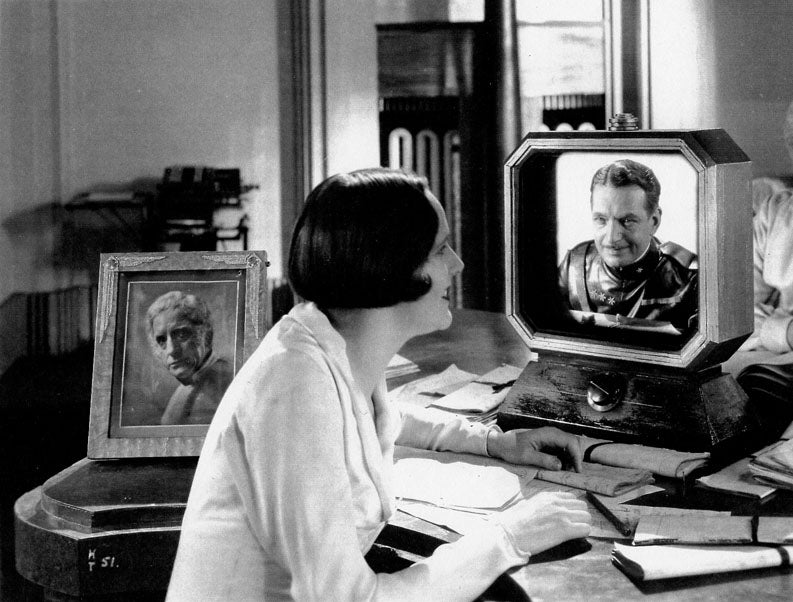 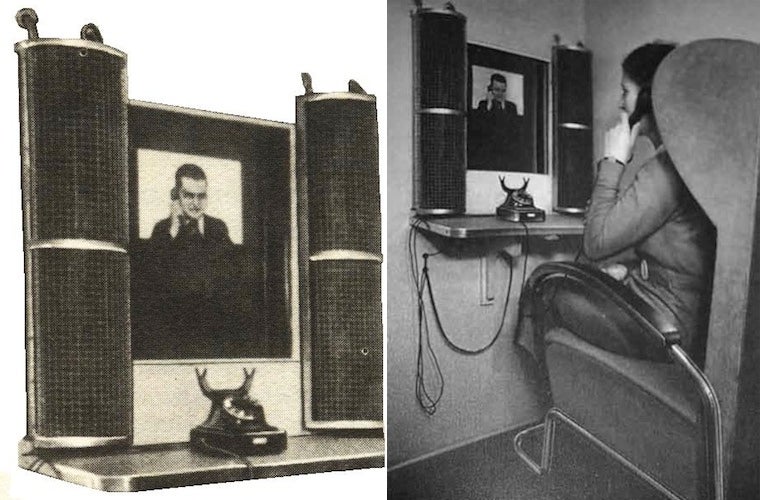 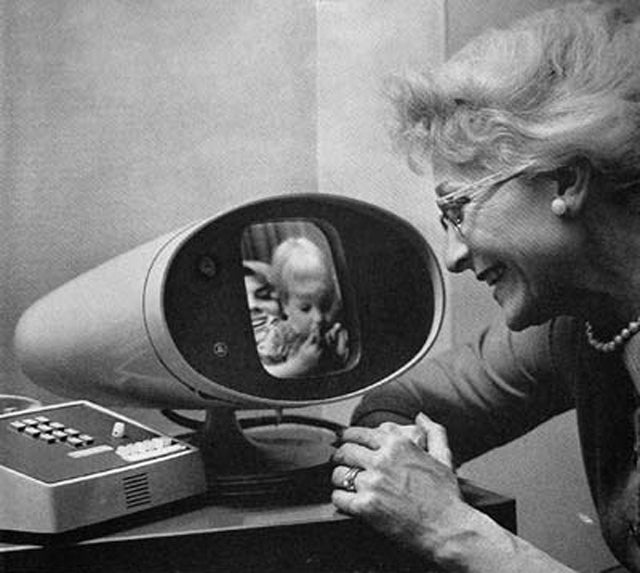 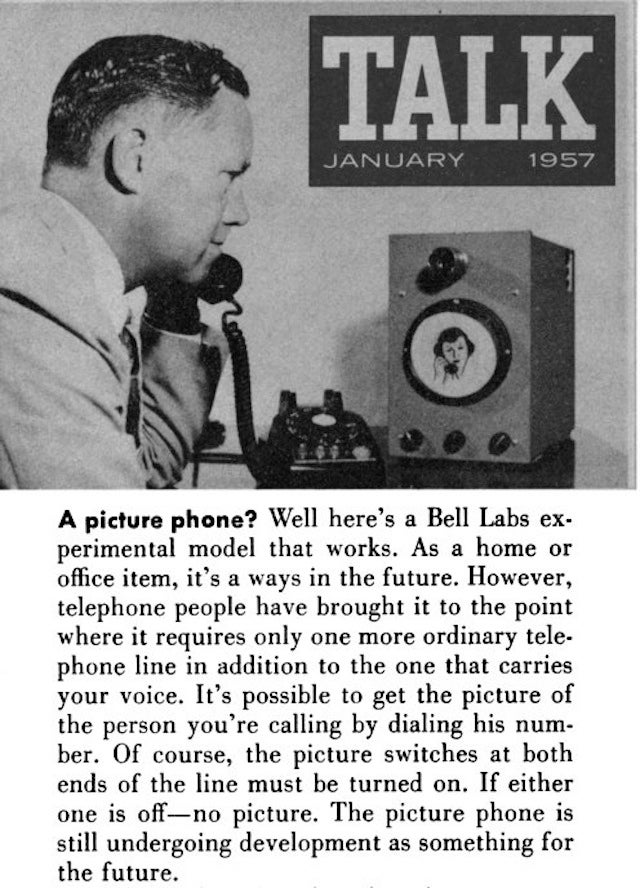 When Art Clokey was a boy he would spend his summers on his grandfather’s farm in Michigan. He had a good pal who lived on a neighboring farm and, as boys liked to do in those days, Clokey and his pal often played with toy soldiers. Sometimes, when the battles were particularly fierce, they would need more troops. Clokey would raise them up by fashioning them out of a mixture of soil and water known as ‘gumbo’ – clay.

Some years later Art Clokey would create a children’s television icon – a kind of strange little character made of clay named Gumby.

Gumby – he’s known to skate on one foot rather than walk.

Before Art Clokey created Gumby he was an early claymation pioneer. It was his 1953 experimental claymation short, Gumbasia, that excited 20th Century Fox producer Sam Engel into giving Clokey his big break. ‘Art, that is the most exciting film I have ever seen in my life,’ Engel said. Engel envisioned a children’s television show using the idea of little claymation figures in various storylines. Giving free reign to Clokey he financed the Gumby pilot, introduced it to Tom Sarnoff at NBC Hollywood, and the rest is history.

Art Clokey’s Gumbasia was a fascinating project. Inspired by his mentor in film making, Slavko Vorkapich, Clokey wanted to work with the idea of ‘kinesthetic film principles’ which enabled him to show film forces through moving objects.

Combining the kinesthetic film principles with Vorkapich’s philosophy of film as poetry and music, Clokey created a short film unique for its time. Music wasn’t used just as a cover – it was an intrinsic part of the experience. The transformation of the objects along with their movements blend with the lyric and the pulse of the jazz. It’s a visual sound experience. It’s also the concept for what would become music video. Gumbasia might properly be considered a prototype for music videos into the future.

THO-RADIA cream, sold according to the formula of Dr. Alfred Curie (not related to the pair of researchers), was prepared with thorium and radium, two elements supposed to erase wrinkles. ‘Science has created THO-RADIA to beautify women. For them to enjoy it. Who wants to remain ugly!‘ Says the slogan of an advertisement extolling the benefits of the product.

Dr. Curie does not stop there he also launched THO-RADIA Powder, which contains titanium in addition to radium and thorium. ‘A choice of insulating material, titanium in particular, salts the bottom of the THO-RADIA Powder with a real covering tissue impervious to weather, to devastating radiation, and advantageously replaces the veil of Circassians‘ says Medical Dictionary and Practical Beauty Care published by Tho-Radia.

‘Logically’ THO-RADIA applies the principle to all kinds of products. Appearing as well as soap, recommended for removing makeup and grooming babies (sic) or THO-RADIA toothpaste. These products were supposed to meet pharmaceutical standards of the time. The mutagenic effects of radiation, in particular the risk of cancer, were discovered in 1927 by Hermann Joseph Muller (1890-1967).

The pharmaceutical industry is not far behind. There was a plethora of drugs to treat various ailments: Tubéradine (against tuberculosis), Digéraldine (stomach problems), Vigoradine (fight against fatigue), among many other names. Evidenced by the advertisements that appeared in the press of the time.

Radioactive water at home was also a success. There were many companies in the sector to rush into this new market. Some homes were even kitted out with radium coffee pots and fountains. It was a simple operation: a capsule of radium salts is housed inside the coffee pots and fountains. On contact with water, the salt released the radioactive fumes.

In the same vein, Revigator was a popular brand from 1920 to 1930. Produced by the company Revigator Radium Ore (San Francisco), it was sold to hundreds of thousands of customers in American homes.

The animals were also entitled to their radium treatment. Offered for sale in this advertisement is a radioactive food supplement for cattle, cows, horses, pigs and sheep. The farmer could also buy fertilizer…radioactive of course.

Wool Oradium was recommended for baby clothes because of ‘the extraordinary effect of organic cell stimulation‘ produced by the radium. In another taste, Iradia proposed underwear, apparently recommended for skiing, as shown in the above advert.

Burk & Braun asserted that adding radium bromide to chocolate has a ‘rejuvenating effect.’

Frederick Godfrey, British hair specialist, boasted the merits of a tonic and radioactive treatment for hair. According to this advertisement, Caradium allowed the recovery of the original hair color, while ‘making you look 10 to 20 years younger.’

Radium Is Health – This book published in 1929 extolls the charms of radioactive treatments.

Extract: ‘the miracles produced by radium in the treatment of cancerous tumors have led many scholars to experiment with the action of low doses of radium for the treatment of various skin conditions.’