The Marx 1966 Man From U.N.C.L.E. Counterspy Outfit had it all. Check out this elaborate store display up for auction at Hake’s. 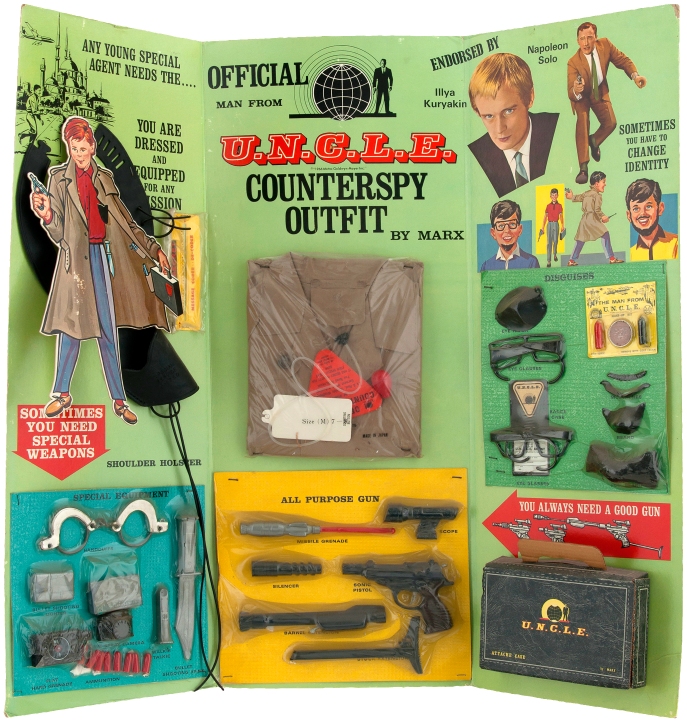 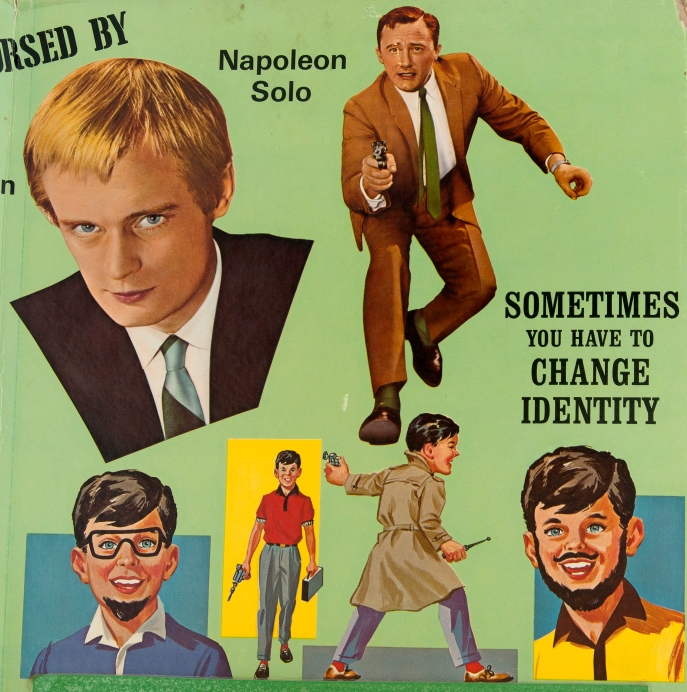 Sometimes you need to change identity… 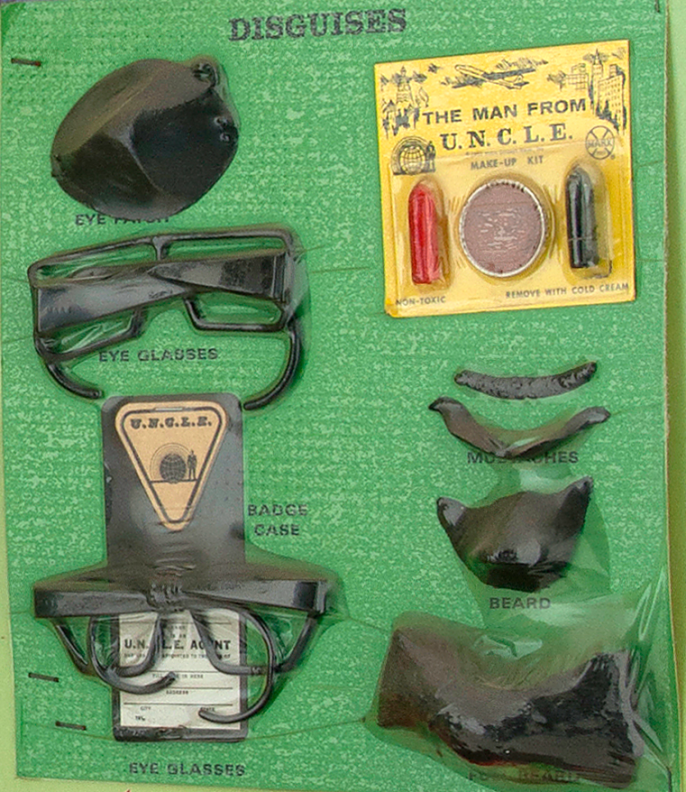 The All Purpose Gun includes: a missile grenade, a scope, a silencer, a sonic pistol, a barrel extension, and a stock extension.

You always need a good gun…

And, of course, what self-respecting counterspy would leave home without the obligatory attache case?

So there ya’ have it – you are dressed and equipped for any mission.

What you hear at the start of this video is the sound of a Chrysler FirePower Hemi V8 engine start and rev-up. Afterwards comes the old familiar wail of the cold war nuclear attack warning.

The main purpose of the [‘Big Red Whistle’] siren was to warn the public in the event of a nuclear attack by the Soviets, during the Cold War. The operator’s job was to start the engine and bring it up to operating speed, then to pull and release the transmission handle to start the wailing signal generation. The Chrysler air raid siren produced the loudest sound ever achieved by an air raid siren. – SuzukiBlaze

When the Chrysler Air Raid Sirens were being retired during the 1970’s a number of car enthusiasts sought out the Hemi V8s for use in bracket racing and street rods.

Before digital everything a number of families, and creative sorts, purchased the old 16-or-8mm camera to film those ‘special moments’ of a day in the life. The imaginative kids quickly figured out the magic of the frame and would often take their little action figures and toys and experiment with their own kind of film-making. The above 16mm Kodachrome stop-motion test print for Camel cigarettes is pretty raw – but every person who remembers the joys of 16-or-8mm film will quickly recall that pleasantly strange world that would come alive with the passing of each frame.

If you’re curious to read more about this particular print click here to get the scoop at Cartoon Research.

In 1955, the high-energy French actor and singer Gilbert Becaud released the hit song titled C’est Formidable! (That’s Great!). It was a perfect marketing opportunity for Vespa to create a hip poster campaign. The poster shows the singer nimbly mounting the scooter as if it were a skateboard (a recently minted pastime itself, at the publication of this poster). The background was equally hip, with Vespa’s patented pastel colors in asymmetrical, intersecting shapes that echo Mid-Century furniture design. Fantastique!

Vespa, or Wasp in English, was named in 1946 for its narrow waist, high-pitched engine and antenna-like handlebar. The product was perfectly suited for the war-torn country, where consumer budgets and poor roads made larger vehicles impractical.

In 1952, the vehicle’s popularity skyrocketed when Audrey Hepburn and Gregory Peck teamed up on a Vespa in Roman Holiday. By 1956, 1 million Vespas had been sold. The Vespa survives today as one of the most fun products on two wheels. 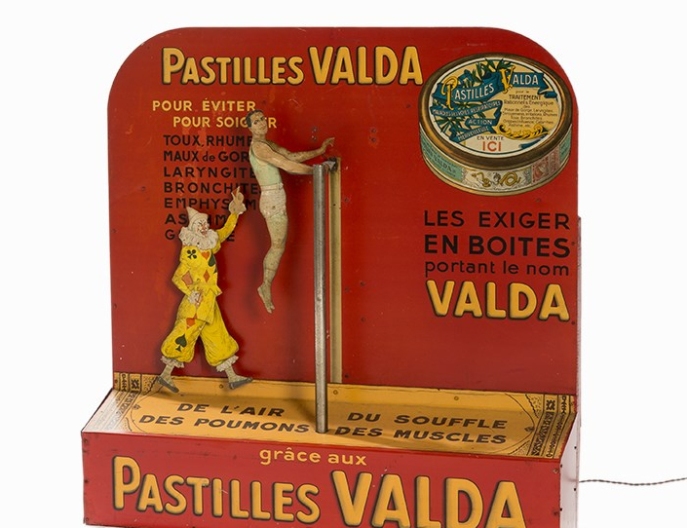 If it’s good enough to keep this athletic acrobat going it’s gotta be good for those just taking in air.

The acrobat gets into his swing. The clown’s in position to spot. 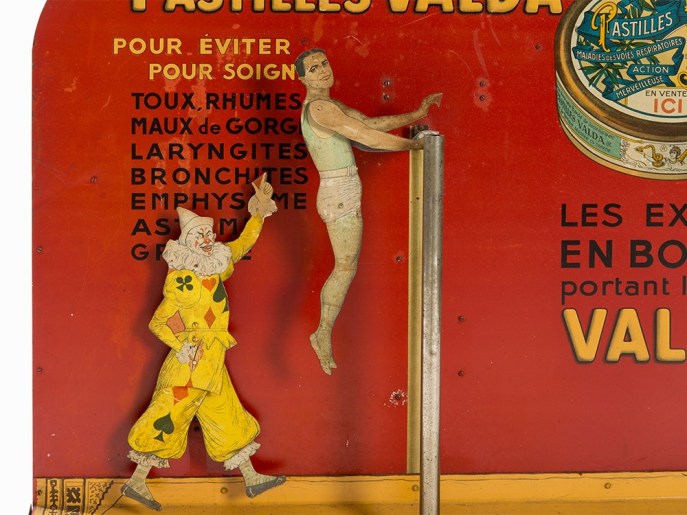 The acrobat comes over the bar backwards and releases for a one-hand grip. His clown buddy enthuses for the viewers.

A view from the top.

This display is an electric sheet-iron lithographed piece. One can really appreciate the thought and craftsmanship put into these automaton displays. Apparently someone did in a real way – this particular item sold on auction for €1,298.00 ($1,458.17).

Frank Tinsley (1899-1965) was a concept artist during a time when the imagination was the only limit. During the late 1940s and through much of the 1950s, Tinsley found a home at Mechanix Illustrated magazine. He wrote and illustrated numerous articles that mused about the future of technology, transportation, strategic military weapons and equipment, and space exploration. Tinsley was a man with a lot of ideas.

When America Bosch Arma Corporation decided to run an advertising campaign to promote their inertial and military guidance systems and space technology, they turned to Frank Tinsley to illustrate their concepts. Below are some his works for the Steps In The Race To Outer Space campaign, with descriptions from the adverts. 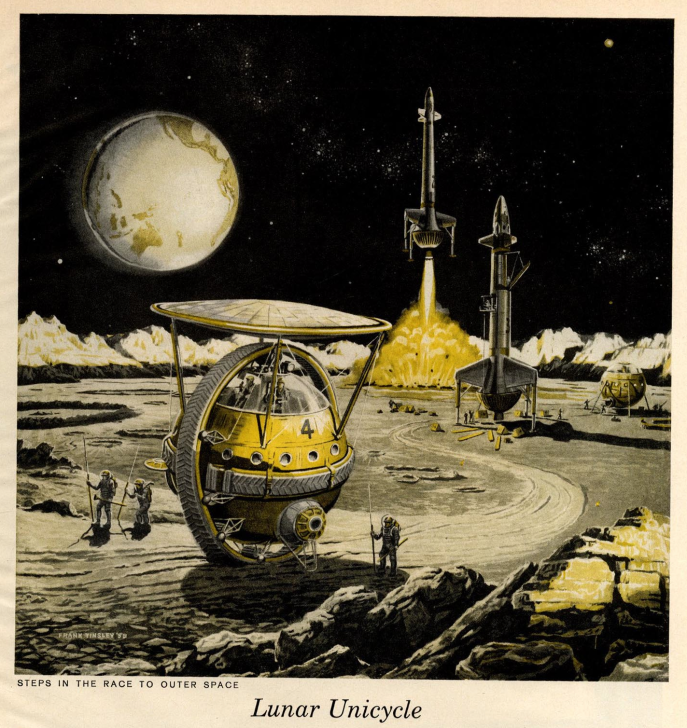 This 30-foot high Unicycle is designed for preliminary exploration of the moon, once a base camp has been established. It’s entirely constructed of inflated, rubberized fabric, with the exception of strengthening members, hatches and a few other items of equipment. Gyros stabilize and steer the vehicle: electric motors furnish the driving power. – Illustration: Frank Tinsley, 1958. 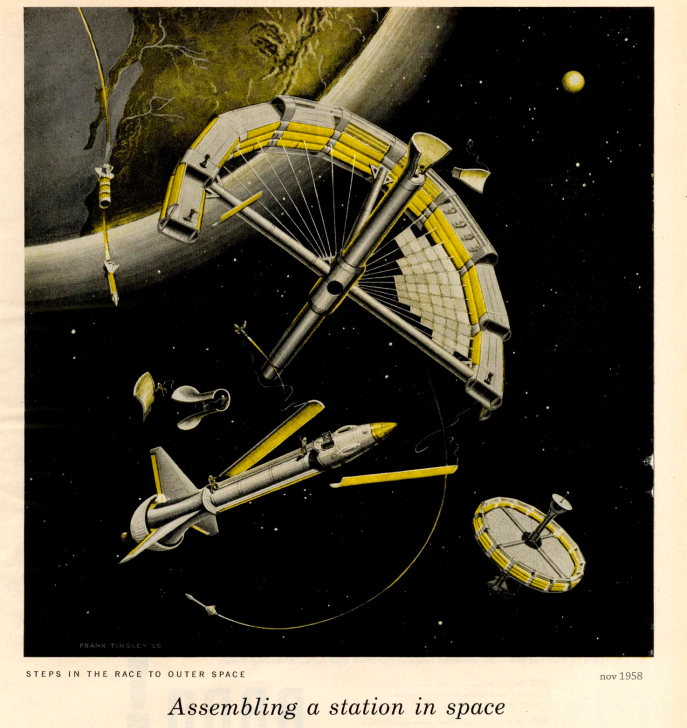 This imaginative but technically accurate illustration shows a permanent satellite (center) being constructed in orbit around the Earth. It generates its own heat and electricity from solar rays. Basic vegetation (such as algae) for oxygen as well as protein-rich foods are grown in hydroponic tubes in upper level ‘greenhouses.’ – Illustration: Frank Tinsley, November 1958.

This nuclear-fueled reconnaissance craft is preparing to land on Mars’ outermost satellite, Deimos – 12,000 miles away from the ‘red planet’ (center) and 35 million miles away from Earth. – Illustration: Frank Tinsley, January 1959.

Spreading its wings to absorb the eternal flow of solar energy is the Cosmic Butterfly, a space vehicle of a type first conceived by Dr. Ernst Stuhlinger of Redstone Arsenal. – Illustration Frank Tinsley, March 1959.

The space-assembled super satellites of the future will periodically encounter disaster – collision, mechanical failure, military attack, or the long chance of being hit by a meteorite. When this happens, ‘lifeboats’ like the one shown here will bring the crews safely back to Earth. – Illustration: Frank Tinsley, March 1960.

By 1970 our solar system will be filled with expended satellites – whirling aimlessly in space with dead batteries and electronic equipment, their missions long since completed.
As space traffic increases, these derelicts will have to be captured and put out of orbit to keep flight paths clear. For this task, special towboats will be designed and crews trained. – Illustration: Frank Tinsley, May 1960. 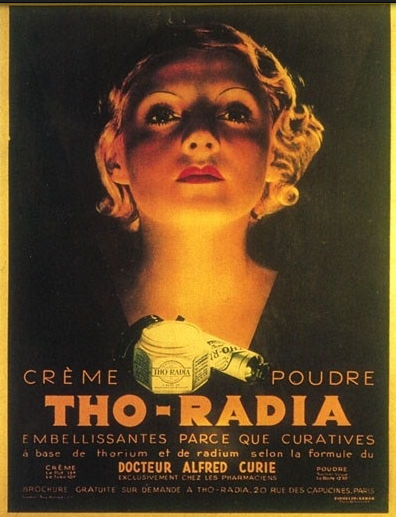 THO-RADIA cream, sold according to the formula of Dr. Alfred Curie (not related to the pair of researchers), was prepared with thorium and radium, two elements supposed to erase wrinkles. ‘Science has created THO-RADIA to beautify women. For them to enjoy it. Who wants to remain ugly!‘ Says the slogan of an advertisement extolling the benefits of the product. 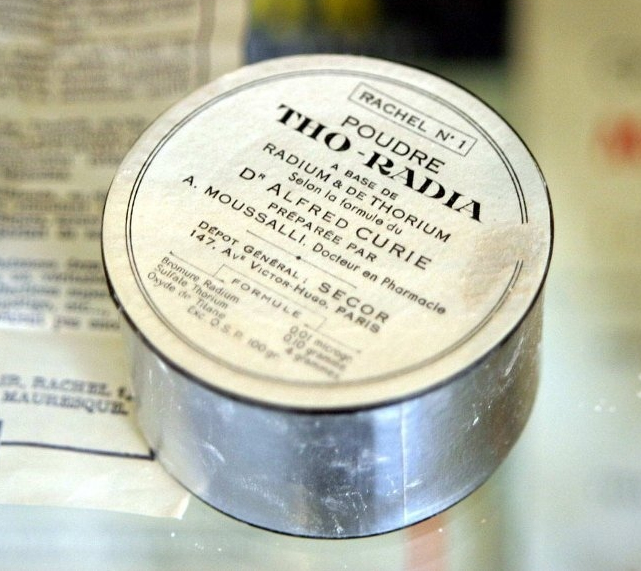 Dr. Curie does not stop there he also launched THO-RADIA Powder, which contains titanium in addition to radium and thorium. ‘A choice of insulating material, titanium in particular, salts the bottom of the THO-RADIA Powder with a real covering tissue impervious to weather, to devastating radiation, and advantageously replaces the veil of Circassians‘ says Medical Dictionary and Practical Beauty Care published by Tho-Radia. 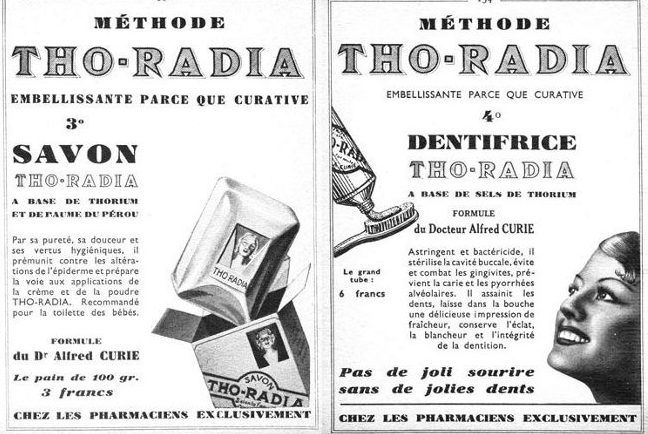 ‘Logically’ THO-RADIA applies the principle to all kinds of products. Appearing as well as soap, recommended for removing makeup and grooming babies (sic) or THO-RADIA toothpaste. These products were supposed to meet pharmaceutical standards of the time. The mutagenic effects of radiation, in particular the risk of cancer, were discovered in 1927 by Hermann Joseph Muller (1890-1967).

The pharmaceutical industry is not far behind. There was a plethora of drugs to treat various ailments: Tubéradine (against tuberculosis), Digéraldine (stomach problems), Vigoradine (fight against fatigue), among many other names. Evidenced by the advertisements that appeared in the press of the time.

Radioactive water at home was also a success. There were many companies in the sector to rush into this new market. Some homes were even kitted out with radium coffee pots and fountains. It was a simple operation: a capsule of radium salts is housed inside the coffee pots and fountains. On contact with water, the salt released the radioactive fumes. 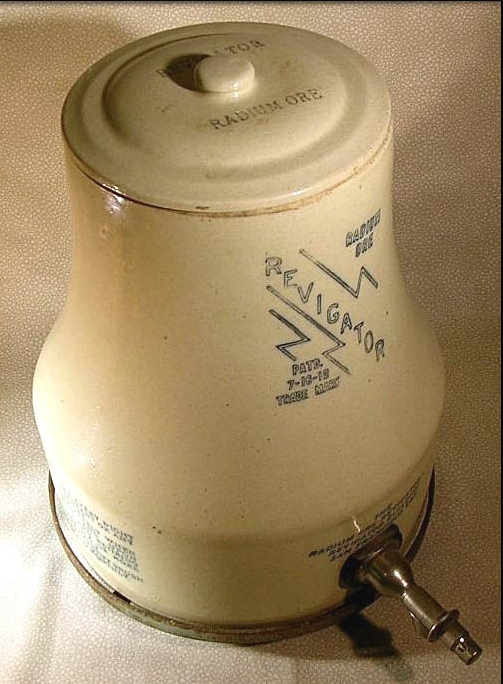 In the same vein, Revigator was a popular brand from 1920 to 1930. Produced by the company Revigator Radium Ore (San Francisco), it was sold to hundreds of thousands of customers in American homes.

The animals were also entitled to their radium treatment. Offered for sale in this advertisement is a radioactive food supplement for cattle, cows, horses, pigs and sheep. The farmer could also buy fertilizer…radioactive of course. 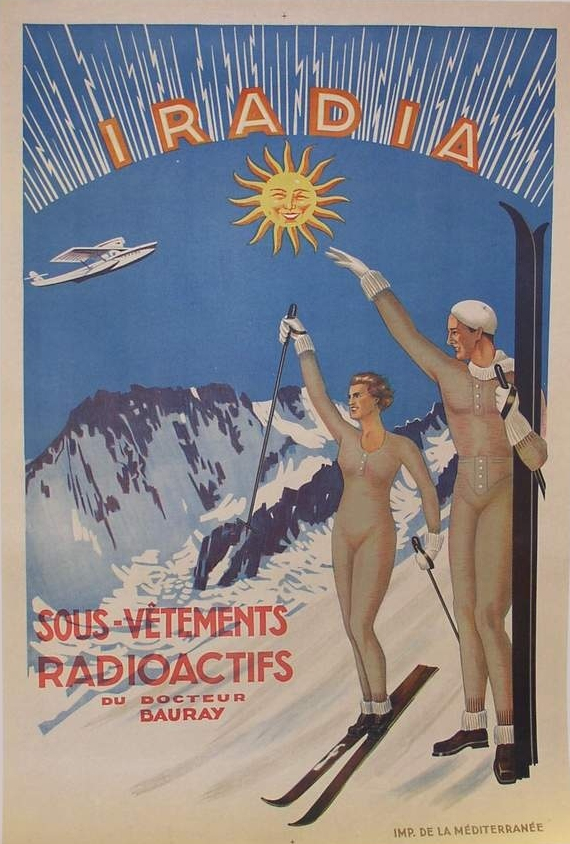 Wool Oradium was recommended for baby clothes because of ‘the extraordinary effect of organic cell stimulation‘ produced by the radium. In another taste, Iradia proposed underwear, apparently recommended for skiing, as shown in the above advert. 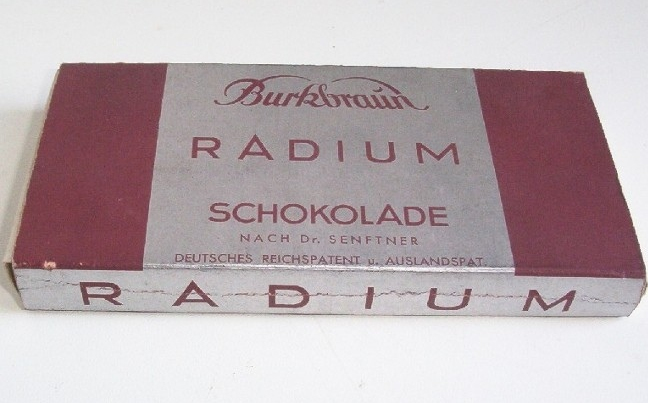 Burk & Braun asserted that adding radium bromide to chocolate has a ‘rejuvenating effect.’

Frederick Godfrey, British hair specialist, boasted the merits of a tonic and radioactive treatment for hair. According to this advertisement, Caradium allowed the recovery of the original hair color, while ‘making you look 10 to 20 years younger.’

Radium Is Health – This book published in 1929 extolls the charms of radioactive treatments.

Extract: ‘the miracles produced by radium in the treatment of cancerous tumors have led many scholars to experiment with the action of low doses of radium for the treatment of various skin conditions.’

Hamm’s Beer company knew how to treat their employees right. Nothing says we care more than a convention survival kit that contains everything one could need to get over those intense employee/management meet-ups. The images of this neat little memento below are provided by Collector’s Weekly. The packaging is super – a tiny suitcase complete with cool illustrations and graphics. 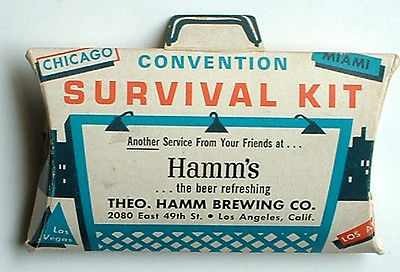 Portable phonographs – they were all the rage in 1958 and Zenith had everyone covered. Check out the models below – they were featured in the USA MOTOROLA Dealer Sales Catalog. The pages have been wonderfully preserved by Mark Meijster, Amsterdam, The Netherlands.

The Moppet – A fun-time partner for the youngsters! The Miracle fabric covering wipes clean in seconds with a damp cloth and is scuff, stain, and scratch resistant.

The Playmate – Styled for the young and the young-at-heart! This Automatic 4-speed record changer has dual flip-over sapphire styli. Lets you Intermix different size records of the same speed.

The Musicmate – A new and completely captivating combination of radio and phono! The exhilarating new concept of design is just right for today’s young moderns.

The Calypso – Hi-Fi in fiberglass! The bold new concept of design adds to the glamour of today and tomorrow! High fidelity sound from 3 speakers, hi-fi amplifier and separate bass and treble controls. This portable was designed for people who were really going places.

The illustrations and graphic design on these pages are wonderful examples of the era – as are the colors (and their combinations) of the phonographs themselves.

In this famous poster for the 1934 Chicago World’s Fair, fan dancer and silent film star Sally Rand, one of the event’s star attractions, points the way to the fair. Rand simulated nudity in her act by wearing a body stocking. The street-sign-like device refers to the unique way the lights were turned on at the beginning of the fair: rays from the star Arcturus were collected at various observatories, focused on photoelectric cells, and converted to electricity. A rhythmic, luminous poster that exemplifies the Machine Age at its most kinetic. – International Poster Gallery