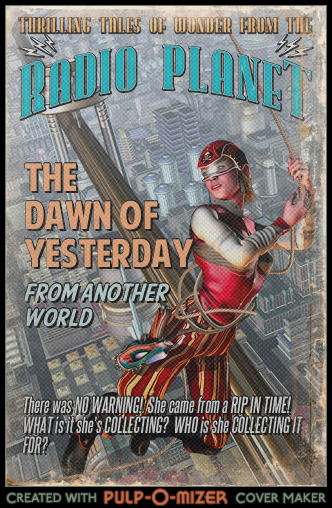 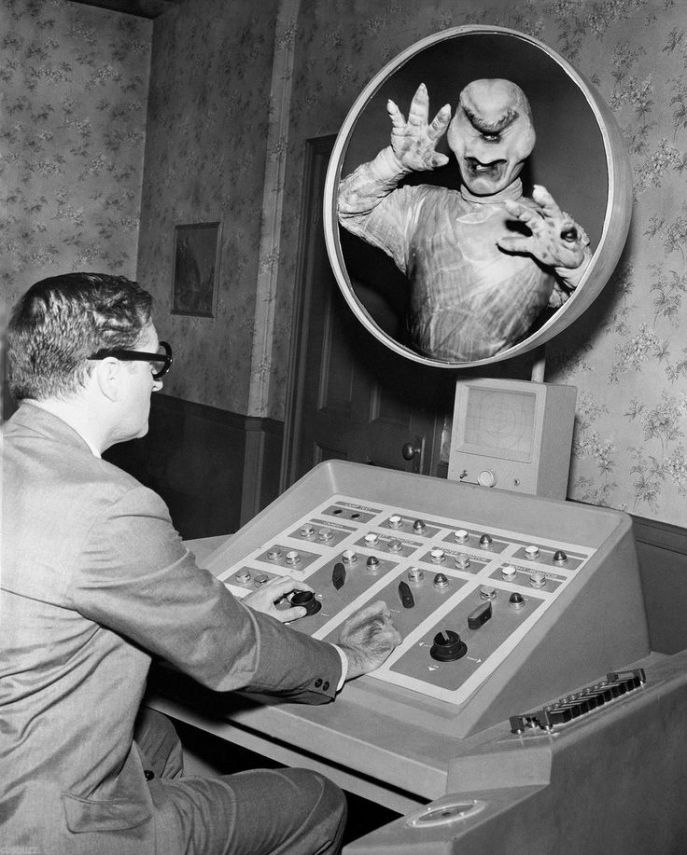 The ‘all-seeing eye’ has been a source of fascination to futurists for quite some time. In a previous post on Atomic Flash Deluxe we considered the 1948 DC comic, How Television Will Change Your Future, with its ‘Eye-In-The-Sky’ and how it relates to George Orwell’s 1948 classic, 1984. In a common vein, The Outer Limits episode, O.B.I.T. – originally aired during the first season of the classic sci-fi television series on 4 November 1963 – takes the concept to a much more sinister level. Wikipedia gives a very nice synopsis of the episode:

In this room, twenty four hours a day, seven days a week, security personnel at the Defense Department’s Cypress Hills Research Center keep constant watch on its scientists through O.B.I.T., a mysterious electronic device whose very existence was carefully kept from the public at large. And so it would have remained but for the facts you are about to witness…

While inquiring into the murder of an administrator at a government research facility, a U.S. senator is confronted with paranoia, secrecy, and intimidation. He ultimately learns the cause: An unusual security device that is used to monitor its employees. The Outer Band Individuated Teletracer (known by the acronym O.B.I.T.)[1] is so pervasive and invasive that no one can escape its prying eye, at any time or within 500 miles. It is even deemed addictive by some of its operators. After a missing administrator is found and reveals his knowledge of O.B.I.T., its sinister, unearthly origins and purpose become apparent; the device is, in actuality, an alien invention that was designed to demoralize and desensitize the human race in preparation for invasion. During government hearings, Lomax, one of the projects administrators reveals himself to be an alien, proudly warning onlookers as to the horrific impact O.B.I.T. will have on mankind. As he speaks, a nearby O.B.I.T. machine shows Lomax in his true alien form.

Lomax: People with nothing to hide have nothing to fear from O.B.I.T.
Orville: (scoffs) Are you that perfect, Mr. Lomax?

Senator Orville (taking Grover’s testimony in the hearing room): Weren’t you in favor of O.B.I.T?
Colonel Grover: I was at first. But I was wrong. (now fighting to compose himself) It’s the most hideous creation ever conceived. No one can laugh… or joke. It watches!

Lomax (revealed as an alien): The machines are everywhere! Oh you’ll find them all, you’re a zealous people. And you’ll make a great show of smashing a few of them. But for every one you destroy, hundreds of others will be built. And they will demoralize you, break your spirits, create such rifts and tensions in your society that no one will be able to repair them! Oh, you’re a savage, despairing planet, and when we come here to live, you friendless, demoralized flotsam will fall without even a single shot being fired. Senator, enjoy the few years left you. There is no answer. You’re all of the same dark persuasion! You demand – insist – on knowing every private thought and hunger of everyone: Your families, your neighbors, everyone — but yourselves.

Agents of the Justice Department are rounding up the machines now. But these machines, these inventions of another planet, have been cunningly conceived to prey on our most mortal weakness. In the last analysis, dear friends, whether O.B.I.T. lives up to its name or not will depend on you.

Certainly a prescient episode so very relevant for the current times: the most incredible invention of the 20th century – the internet – could be used as a source of education and global communication that would better the world, but instead of this its been turned into a source of corporate consumerism, conflict, pernicious gossip, surveillance, and…control.

The prophets of the early-to-mid 20th century were truly remarkable in their visions – it’s unfortunate that we’ve failed to heed their warnings.

It’s been a bit since the last post in this little corner of the World-Wide-Web – life can be quite the journey here in time and space – but some time must be taken to share this bit of interesting info. Nothing Earth shattering, but quite worthy of note for those who hold a curiosity for that which we have all come to know as the Atomic Age.

Hake’s Americana & Collectables is in the final days of bidding for their Auction #221 and do they have a classic up for grabs – Item 1066. It’s the GILBERT NUCLEAR PHYSICS NO. U-238 ATOMIC ENERGY LAB” BOXED 1952 SET in pristine condition. Folks have shown a bit of interest in this item at the Atomic Flash Tumblr site since it was first posted in September 2016.

Today it could be yours – for a pretty fancy price. We give the floor to Hake’s: 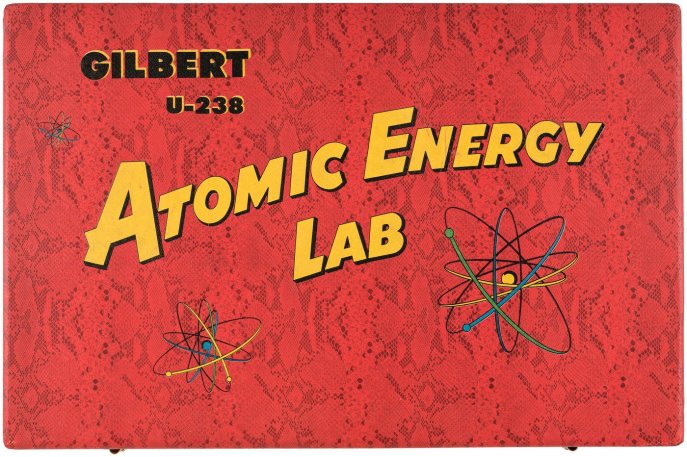 16.5×25.25×4.75″ deep textured paper-covered case contains A.C. Gilbert Co. set No. U-238 (a clever reference to Uranium-238, the most common isotope of uranium found in nature). This infamous lab’s intention was to allow children to create and watch chemical reactions using radioactive material. 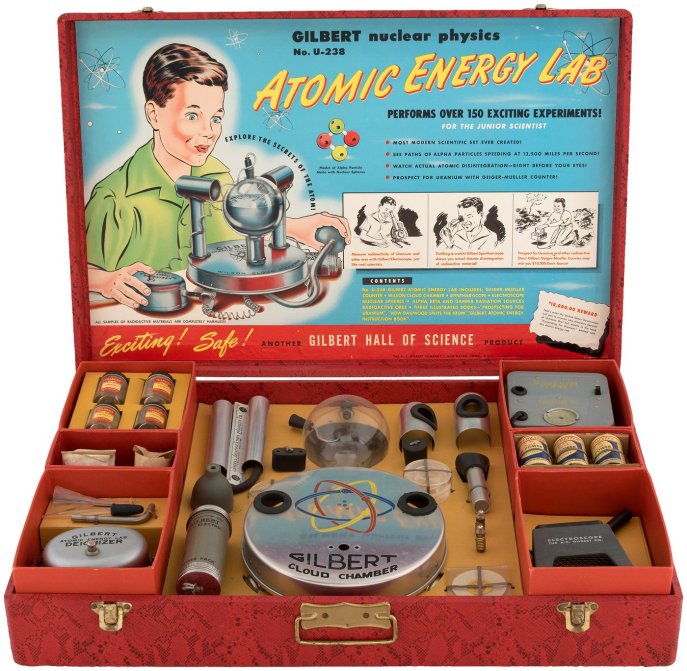 The lab contains a cloud chamber that allowed the viewer to watch alpha particles travel at 12,500 miles per second, a spinthariscope (a device for observing individual nuclear disintegrations caused by the interaction of ionizing radiation w/a phosphor or scintillator) that showed the results of radioactive disintegration on a fluorescent screen and an electroscope that measured the radioactivity of different substances included in the set. Looked upon as being dangerous because of the radioactive material in the set, Gilbert claimed that none of the materials could conceivably prove dangerous. 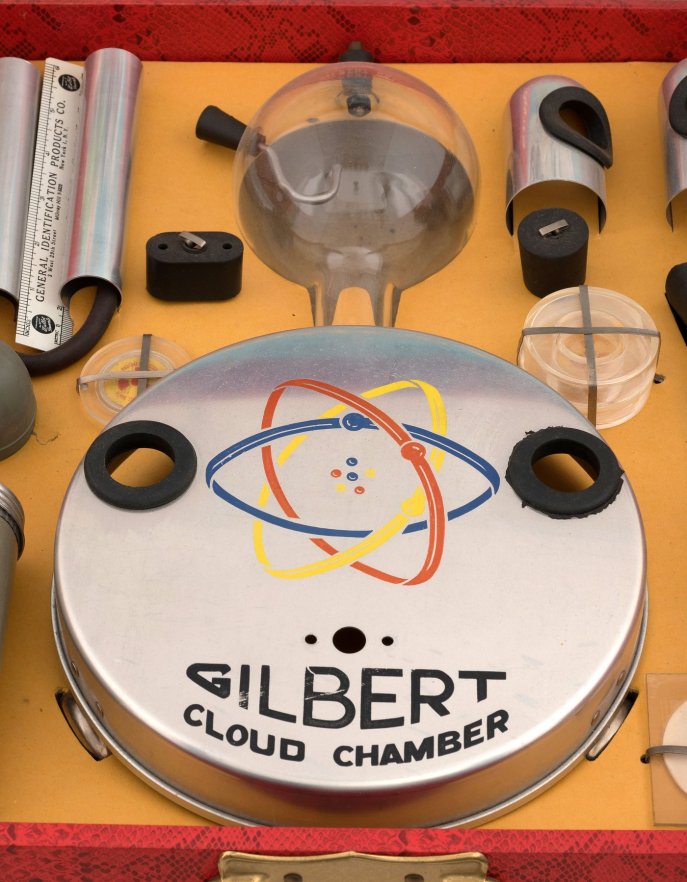 The lab contains a cloud chamber, a spinthariscope, and an electroscope. 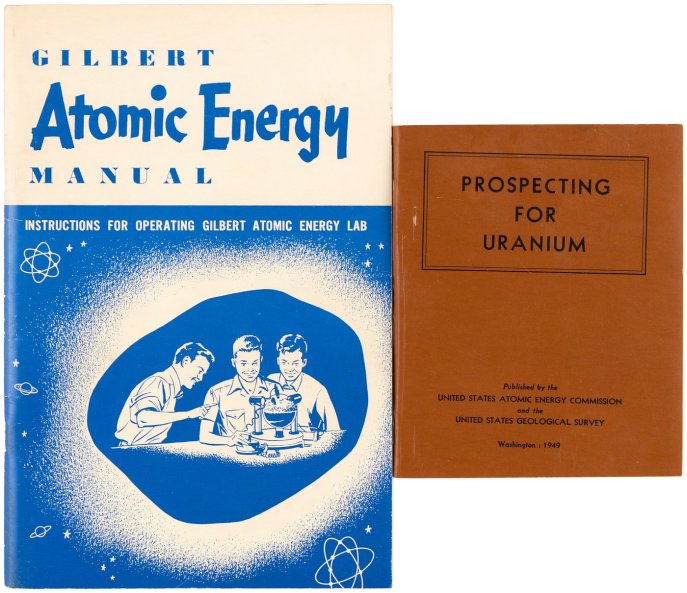 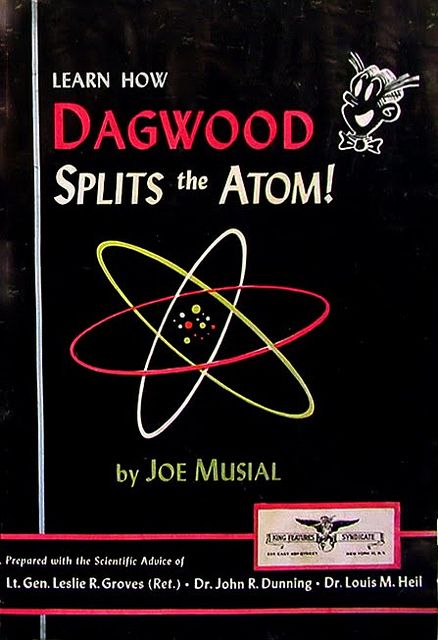 The cover of Learn How Dagwood Splits the Atom – it’s all very scientific, you know. (The image is not on the item page but this book is also available with the set.)

Case shows little to no wear and displays Exc. Contents are complete and unused w/original packing material and show some scattered aging/dust soiling and are VF overall. Books/manuals show more moderate aging w/some pinch creases to spines. Fine overall. Unlike other chemistry sets released by Gilbert, the U-238 Atomic Energy Lab never gained popularity and the toy was taken off shelves, selling only from 1950 through 1952. Old store stock, choice condition example of this later 1952 version, as nice as they come. Special shipping required due to contents. This is the second example from this collection, the previous example selling for $8,696 w/o Dagwood books and added Prospecting book. Barry Lutsky Collection.

So there ya’ have it!

A set in this condition is extremely hard to find. The current bid is $4,500 – if you’re a serious collector you have a shot at getting this on a real deal. Go for it now if you’ve ever wanted a marvelous piece of Atomic Age Americana.

Paul László was a Hungarian-born modern architect and interior designer whose work spanned eight decades and many countries. László built his reputation while designing interiors for houses, but in the 1960s, largely shifted his focus to the design of retail and commercial interiors. – wikipedia

László was the quintessential Atomic Age mid-century designer. In 1952 TIME magazine called him ‘The Rich Man’s Architect’. He did it all – he ‘design[ed] his houses down to the last ashtray or built-in Kleenex holder.’ He also designed a rather mod US Air Force bomb shelter: 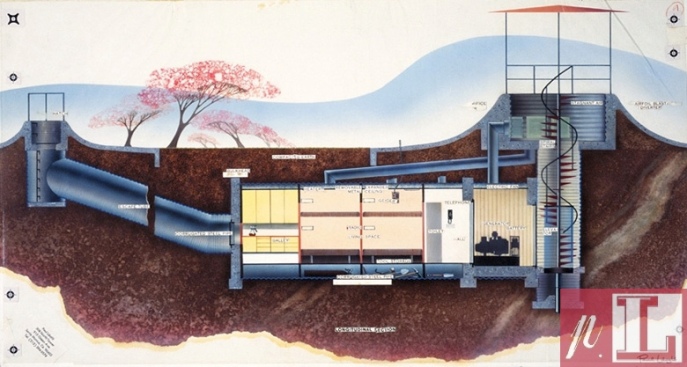 Below are some super articles covering Paul Laszlo’s Atomic Age masterpieces. Super thanks to MidCentArc on flickr. (Click on the images for a larger view) 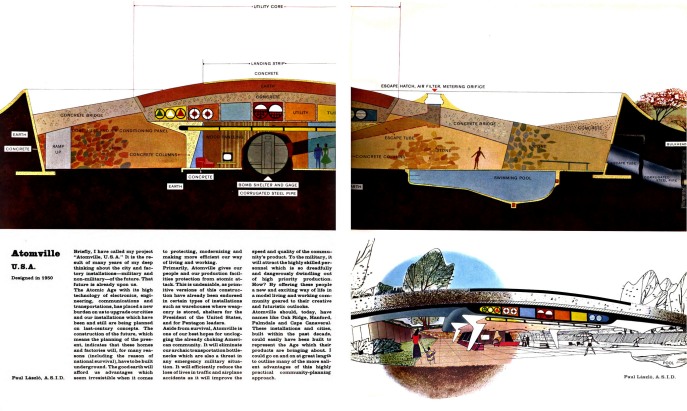 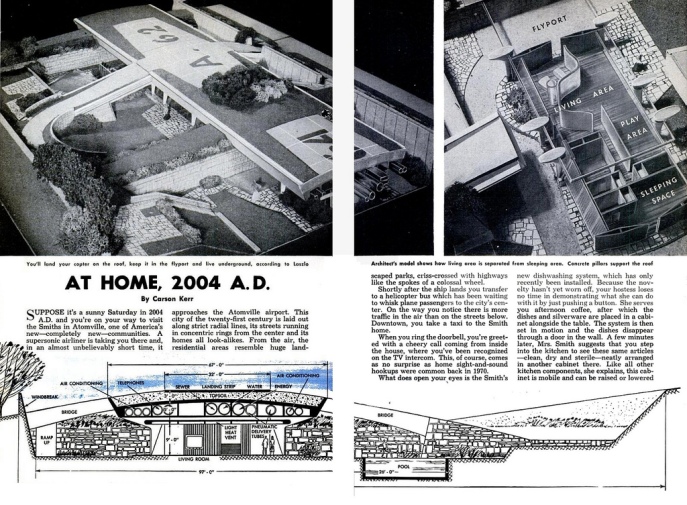 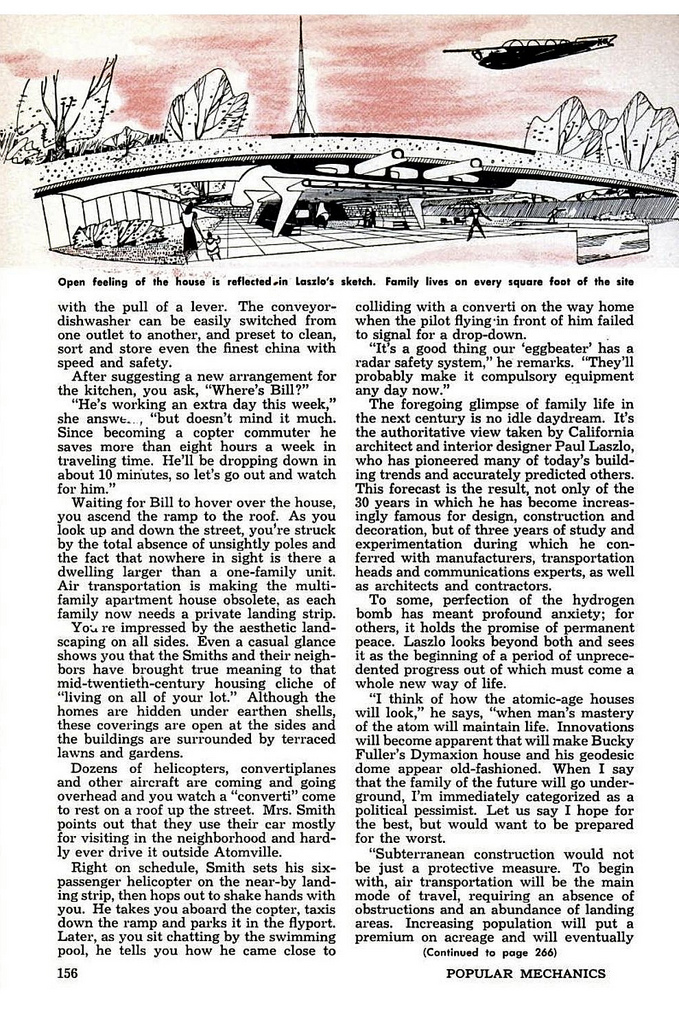 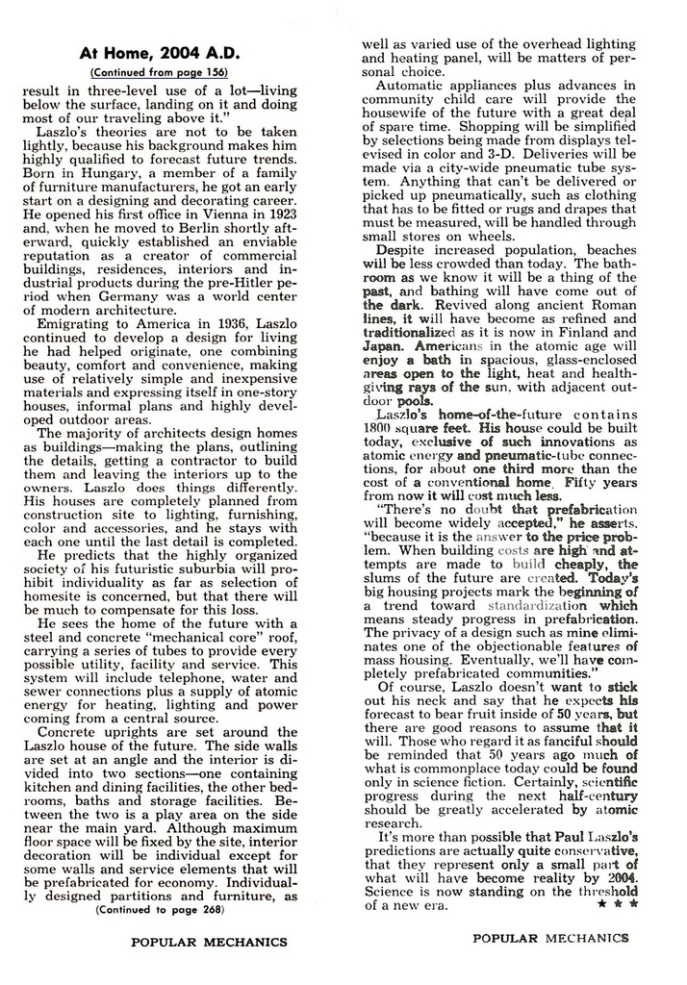 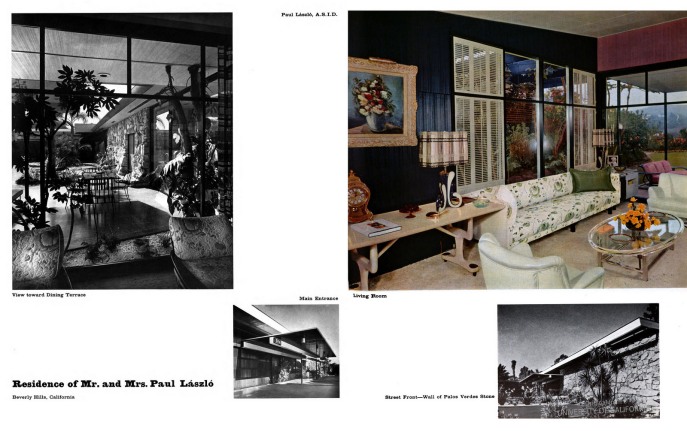 Paul Laszlo was truly a Mid-Century visionary – if you could afford him. 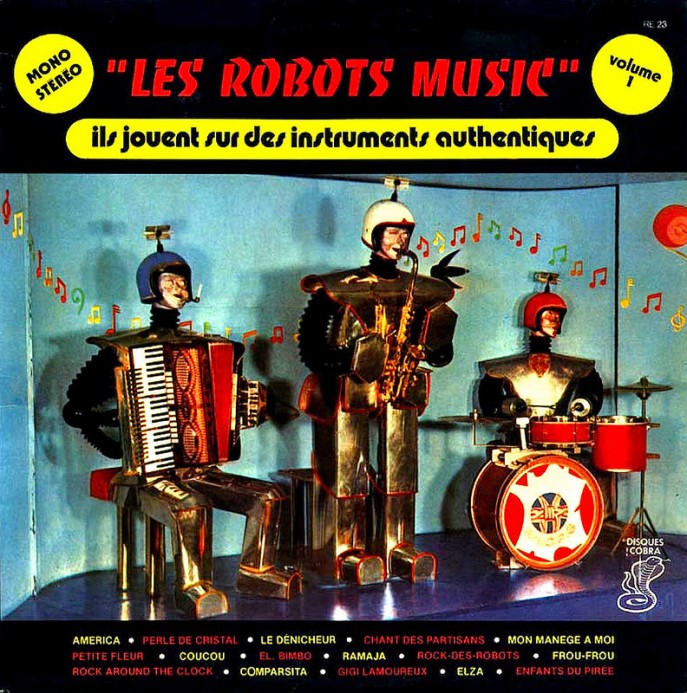 The Robots: Oscar on Accordion, Ernest on Sax, and Anatole on Drums (image via 4peepsake)

Seen above is The Robots first lp record album cover released in the late 1960s. They were the first animatronic musical group that actually play real instruments.

An ex-POW in Germany during WWII, [Edouard] Diomgar was an engineer willing to raise money for his ex-POWs relief foundation (whose logo can be seen on the bass drum). During the 1950s and 1960s, he exhibited his robots trio at fun fairs, open air markets or train stations in France…Automatically synchronized, the bots’ movements are impulsed by photoelectric cells reading punch cards, sending information to arms and fingers via electromagnetic action. Most importantly, the robots actually produce music from their instruments, contrary to playback systems in US animatronic. Only the sound of the saxophone is replaced by what sounds like a mechanical Ondioline. Their repertoire includes everything from French musette accordion and popular songs, twist and rock’n’roll numbers from the 1960s, US musicals (#1, Leonard Bernstein) or jazz (#6, Sidney Bechet).

Les Robots-Music were exhibited during an all-robot show in Berlin’s Museum für Kommunikation in 2007. Check out their lively rendition of La Bamba below…

To read a bit more about the history of animatronic robot orchestras click here to get the scoop from Continuo.

Come fly with us…!