They’re out-of-sight and out-of-mind these days but they’re still ready to do business when called. Yes, those Cold War classics, the U.S.A./U.S.S.R. nuclear missile collections, are still as relevant today as they were in the 20th century. Perhaps you’re part of the younger set who have no Cold War experience – the olden days of paranoia, crazy ideas like bomb shelters, and all that laughable stuff like ‘duck and cover.’ Yep, today we know that there’s not much to do in ‘the event’ and who would want to survive that stuff anyway? When we hear the clarion call of enemy missiles on the way, we’ll just climb up the highest hill, get a little drunk or high or both, and watch the freaky show as we evaporate into the All.

But wouldn’t it be fun to impress your friends and/or family during those last couple of hours or minutes? You can by knowing your nukes! Learning is fun and easy with the Monogram U.S.A./U.S.S.R. Missile set! The 2013 U.S.A./U.S.S.R. Missile Set is a reissue of the 1985 Cold War edition released shortly before the collapse of the Soviet Union. The name may have changed, but those missile classics remain in the attentive care of the Russian Federation.

As you build each model you’ll become familiar with the different size, shape, and look of each explosive missile. For the U.S. you get the mighty Titan II, the stylish Minuteman III, and the awesomely ironic Peacemaker, as well as the Pershing II. But that’s not all! There’s the sea-launched Polaris A3, Poseidon, and Trident. A pair of cruise missiles are also included – the ALCM (Air Launched Cruise Missile) and the sea-launched Tomahawk.

The Soviet set name classifications are a hoot. They include the US Department of Defense designations, consisting of ‘SS’ and a NATO codename. You get the massive SS-18 Satan, SS-4 Sandal, the stylish SS-13 Savage, the SS-17 Spanker, the SS-19 Stiletto, and the stubby SS-20 Saber. The sea-launched missiles include the SS-N-8 Sawfly, the SS-N-17 Snipe, and the SS-N-18 Stingray. And finally, you also get the classically designed air-launched AS-6 Kingfish.

If you’ve never worked with models before you’ll find that these missiles are fairly easy to construct with most consisting of only two halves and 45 pieces in all. Included with your kit you get a decal sheet to give those missiles an authentic touch, and a display base to show off your handiwork – this also makes for a nice quick-glance study guide. 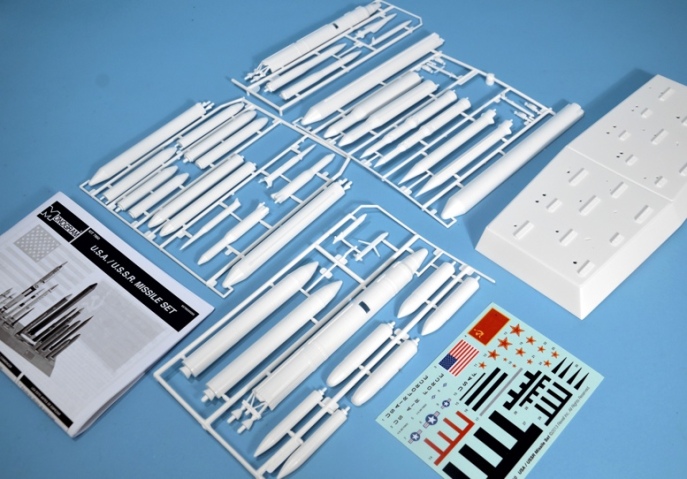 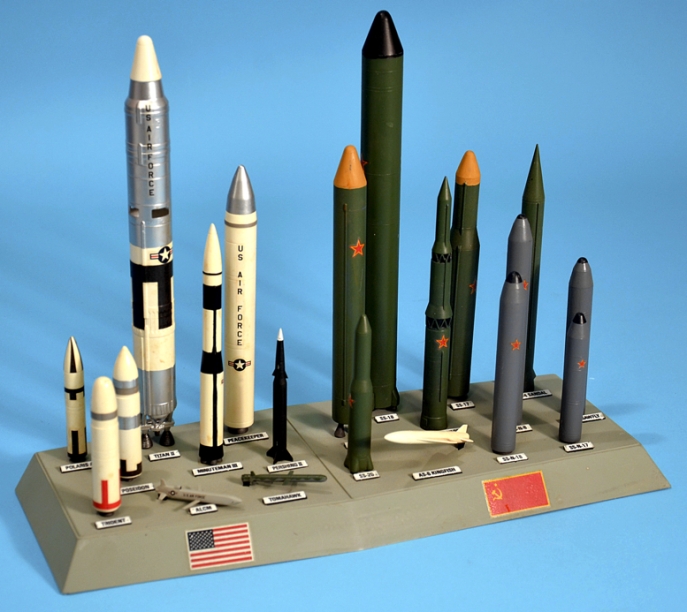