The 1960 Plymouth XNR is an unusual and storied little sports roadster. Reflecting creative designer Virgil Exner’s affection for Indy style – XNR being a play on Exner’s name –  it’s asymmetrical makeup has always divided observers. Plymouth proudly promoted the XNR’s driver-centric stance describing it as, ‘Functional, beautiful, unprecedented: the entire design is concentrated around the driver.’  Unlike other concept vehicles of the time which were developed with fiberglass, the Plymouth NXR was built entirely of steel by Ghia craftsmen in Turin. Virgil Exner had his ‘dream car’ design built to last, and to drive. 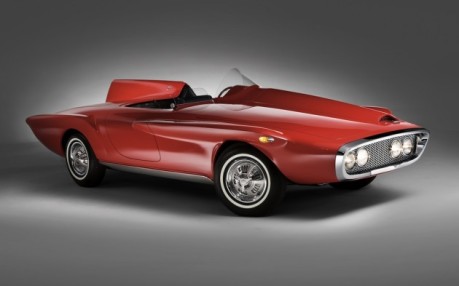 Plymouth XNR – A Driver’s Car: A large, offset hood scoop led to an extended sculptured rise, which faired into the cowl and embraced a low, driver’s side curved windscreen, then flowed smoothly into a single offset tailfin.

Plymouth XNR Driver’s Side: View Of Low Curved Windscreen, (The Glovebox To The Right Could Be Removed And Used As A Camera Bag.)

Plymouth XNR – A Driver’s Car: On the passenger side, a folding, Brooklands-style, flat windshield was accented by a snug-fitting, steel tonneau cover. 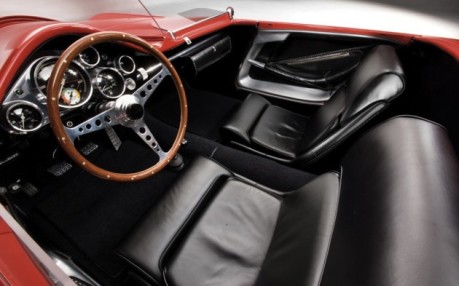 Plymouth XNR – A Driver’s Car: with a black leather interior, twin bucket seats, deep door cavities with zipper pockets, and a stowage area for luggage. Its passenger seat was positioned four-inches lower than the driver’s, and there was a padded headrest for the driver.

Exner was also a true believer in the tailfin – not just for the jet-age aesthetic, but also because he believed in the stability enhancing qualities that the fin provided. He even involved himself with wind-test studies in Michigan. The XNR sports a tall side tailfin. 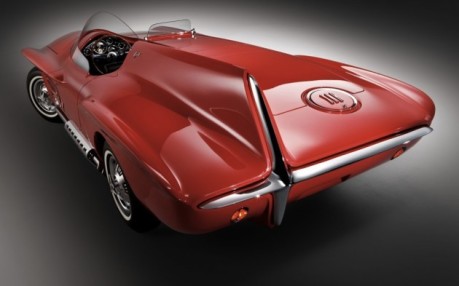 The XNR’s front and rear views were given great style and design attention as well.

Plymouth XNR Front View: A bold, extended nose, framed with a thin chrome surround, outlined a solid aluminum grille with holes drilled for cooling, and incorporated a set of then-popular quad headlights. A slender reveal on each side was fronted by a small running light in an aircraft-inspired nacelle.

Plymouth XNR Rear View: In back, a vertical strip emerged from the tall fin, flowed under the lower deck, and tee-ed into another thin blade, forming a bold cross that served as a bumper. 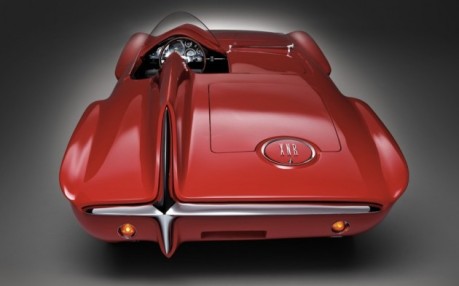 Even the instrument panel had its unique characteristics.

Plymouth XNR Instrumentation: Full instrumentation included an 8,000 rpm tachometer, which incorporated a vacuum gauge. Mr. Exner had an affinity for photography and incorporated his personal hobby into the instruments. The dials have individual, inverted lenses that mimic camera optics.

On Saturday, 18 August 2012, the Plymouth XNR concept car was put on auction in Monterrey, California. Early expectations were that this unique and storied (read below) treasure would sell for over one-million dollars. It seems that the XNR still holds its controversial status – the winning bid was $935,000. That’s certainly not a paltry sum by any length of the imagination, but it is an indication that even to wealthy collectors Exner’s ‘Dream Car’ is still undervalued for its singularity.

While this post focused on the exterior aspects of the XNR design, there is much more to note about this rare one off concept vehicle.  For instance, the power plant of this street ready vehicle used the same design as that used in the 1960 Daytona NASCAR compact class race program – RM Auctions points out that, ‘(t)his slant six went on to dominate the top seven places, subsequently canceling the class due to lack of competition!’ Also of great note is the 50 year history of how the XNR went from Michigan to Europe, winding it’s way to the Middle East and into the hands of the Shah of Iran, ending up in Lebanon for the duration of that country’s civil war (1975–1991), and finally back to North America to win the coveted Gran Turismo Trophy at the 2011 Pebble Beach Concours d’Elegance.

If you’re at all interested in those details and much more you can visit the RM Auctions page by clicking here.