Special Thanks To: Todd Franklin

Hey kids! Pull up your bobby socks and get ready to duck and cover ’cause we’re visiting the American Museum of Atomic Energy! I’m sure you’ve heard about that little project during WWII called the Manhattan Project, right? You know, atomic bombs and such. The souvenir beanie above is telling the truth when it says, “Oak Ridge, Tennessee is the home of the atomic bomb. This “secret city” sprouted up during the war years and in its factories the atomic bomb was built. After the war, the town shifted to civilian control.

In 1949, Oak Ridge also became the home of the American Museum of Atomic Energy! This was the place to learn about the benefits of the all powerful atom. More importantly, it was the place where you could get a radioactive dime to take home as a souvenir! 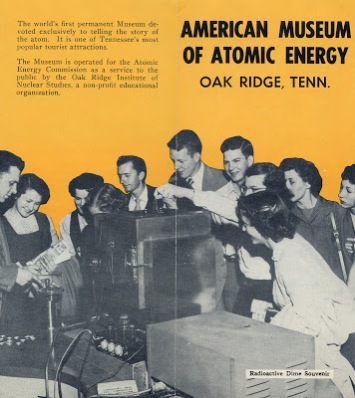 In the brochure pictured above, it looks like those teenagers are having fun feeding the machine dimes. Boy, that sure beats getting a wooden nickel for a souvenir!

Unfortunately, the dime didn’t glow like my exaggerated example, but that’s how I like to imagine it when it came out of the machine. In reality, the radiation faded away quickly and the dime was supposedly safe to stick in your pocket. (Click here for more info on irradiated dimes and here for another photo.)

The museum was much more than radioactive dimes according to these excerpts from the brochure.

The Dagwood Splits the Atom exhibit looks like fun! Science is always better when explained by comic characters. Apparently this exhibit made the rounds to various fairs and museums. Click here and here to view the official comic.

Here you get to see a schematic model of plants that helped build the atomic bomb. 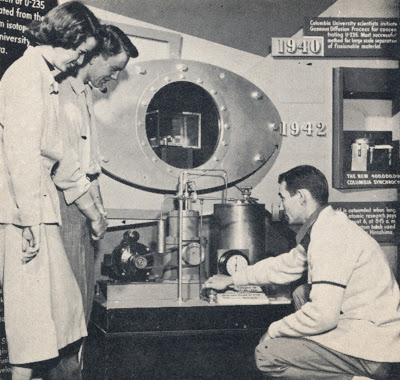 The first gas diffusion separation is on display. (You know, I really don’t know what any of this means, but it sure does sound interesting!

The Theatre of the Atom. I think this is where an audience member would get their hair zapped. Click here to see this gal get a new atomic hairdo!

The American Museum of Atomic Energy moved to a new location in 1975 and in 1978 the name was changed to American Museum of Science and Energy. Even though they don’t have a dime irradiator machine the place still looks like a fun family outing.

I leave with you this very cool photo of a vintage bowling shirt from Oak Ridge. I snapped this pic at the Bowling Hall of Fame back when it was located in St. Louis, Missouri.

The first public showing of an ‘atomic garden’ took place on March 4, 1961 at the Home and Flower Show in Cleveland, Ohio – (Photo:  Frank Scherschel for LIFE Magazine)

The ‘atomic gardening fad’ was part of the ‘Atoms For Peace‘ program – it occurred during the late 50s to the mid-60s. Citizen gardeners, were encouraged to compete with one another in the field of radiation-induced mutagenesis – using irradiated seeds for plants and crops in order to mutate the offspring to make them bigger, more colorful, more resistant to disease and parasites, or to enhance fitness in stressful environmental conditions, such as drought, frost, or poor soils. 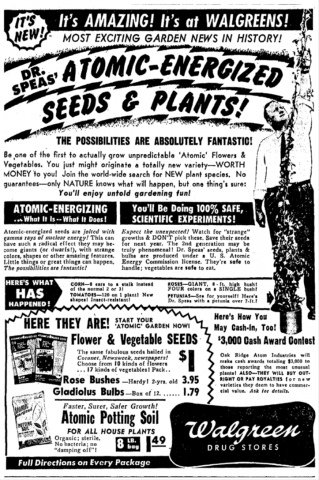 In 1960 dentist-turned-entrepreneur, Clarence J. Speas, founded Oak Ridge Atom Industries, Inc. to sell ‘atomic’ products. Speas, via Oak Ridge, became a major player in the citizen ‘atomic gardening fad’ – to encourage interest, Oak Ridge sponsored a contest for the ‘most unusual plant’ with a prize of $3,000 and agreed to ‘purchase or pay royalties on new varieties deemed to have commercial value.’

This atomic age fad has pretty much faded from history and is usually only referred to in relation to contemporary arguments that surround the use of GMOs by major corporate players like Monsanto.  Supporters for the use of GMOs argue that genetic modification of plants and crops is a part of agricultural history for thousands of years – the ‘atomic garden fad’ is an example of how state, corporate, and citizen cooperation can go a long way in viable research through understanding and acceptance of this fact. Those more suspicious of corporate GMO research and implementation of genetically modified plants and crops point out that the ‘atomic garden fad’ was a rare moment of open and shared information between science and the citizen – today’s genetic-modification programs are sheltered from discussion by copyright claims and intellectual property privacy.

Nanotechnology researcher and gardening enthusiast, Paige Johnson, hopes to shed some new light on this mid-century fad. From her research so far she notes that very little information is available about the results related to the citizen gardening. It’s possible that the government may have some research data but it is not easily found. An interesting 2011 interview is posted at the Pruned website here.

It’s interesting to note that while the atomic backyard gardening fad pretty much faded from public attention in the mid-60s, no one is quite sure how many irradiated seeds are still in circulation, or if and how many smaller crops are offspring from generations of genetically modified parents. Also, large scale radiation breeding never actually stopped and is now experiencing a renaissance due to the introduction of ‘new methods that speed up the identification of mutants.’ Below is a photo of the world’s largest ‘gamma garden’ located in Hitachiohmiya, Japan. It has an ‘88.8 Terabecquerel Cobalt-60 source, ringed by a 3,608-foot radius Gamma field, and a 28-foot high shield dike around the perimeter.’ 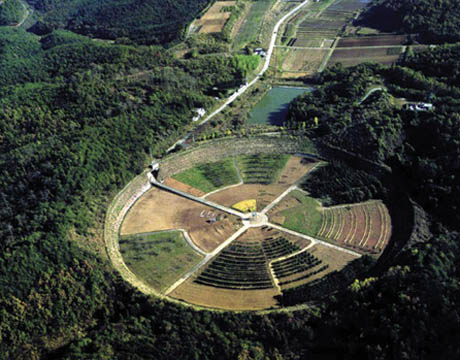