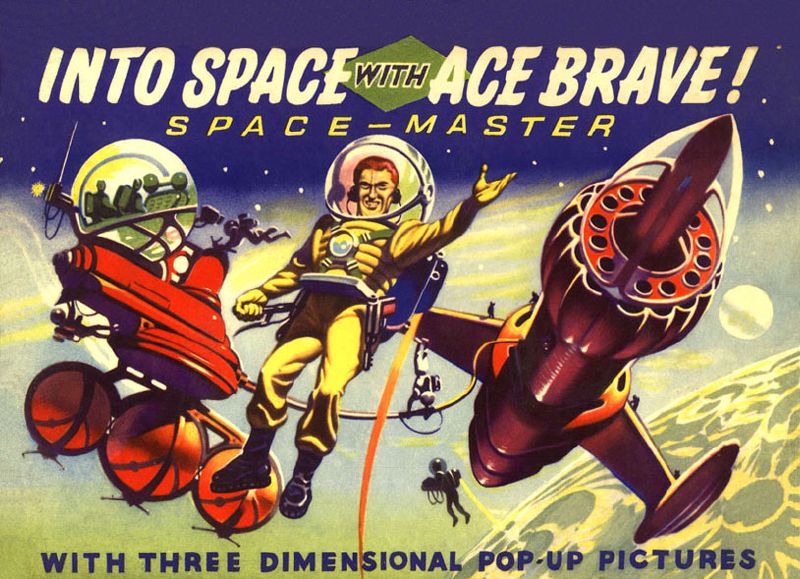 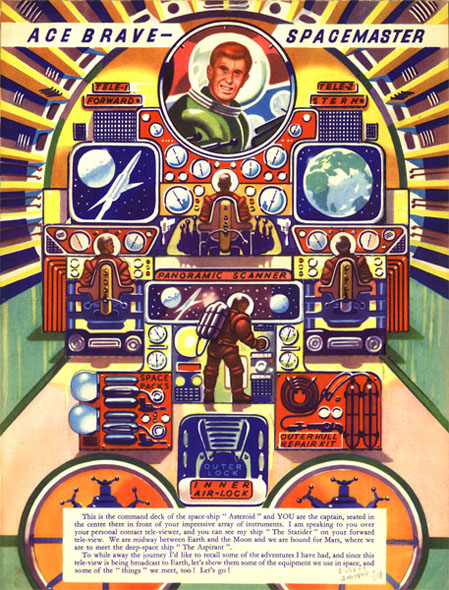 This is the command deck of space ship ‘Asteroid‘ – and YOU are the captain, seated in the center there in front of your impressive array of instruments. I am speaking to you over your personal contact tele-viewer, and you can see my ship ‘The Starider‘ on your forward tele-view. We are midway between Earth and the Moon and we are bound for Mars where we are to meet the deep-space ship, ‘The Aspirant.’

On our journey I’ll share some adventures I’ve had and some things we’ve met, but first let’s review some of the equipment we use in space. Let’s go! 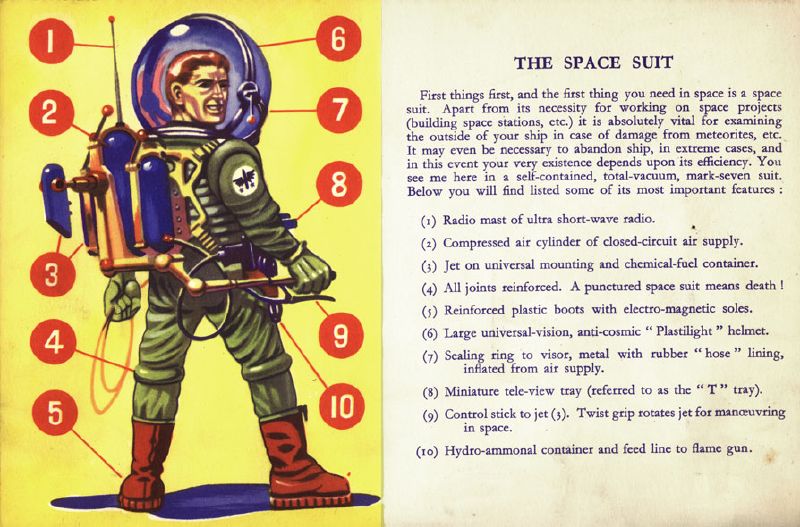 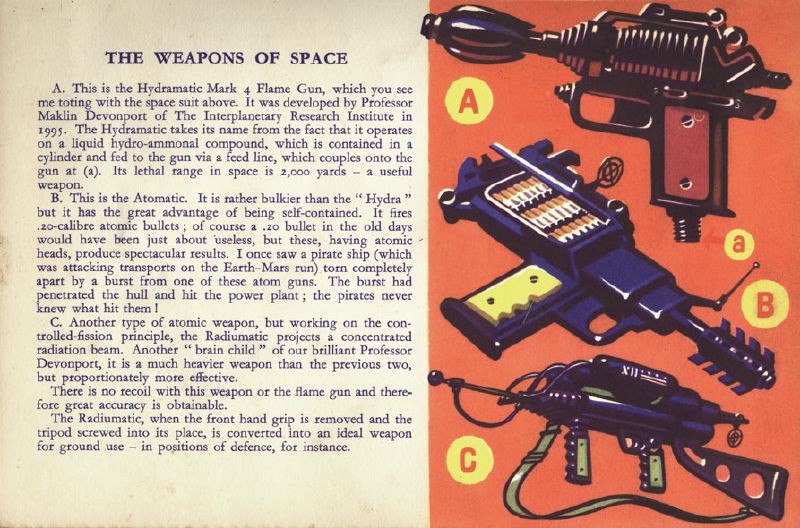 The Weapons Of Space

A. The Hydramatic Mark 4 Flame Gun which uses a light hydro-ammonal compound – its lethal range in space is 2000 yards.

B. The Atomatic which fires .20-caliber atomic bullets – the burst from these atomic guns produce spectacular results.

C. The Radiumatic which works on the controlled-fission principle produces a concentrated radiation beam. The Radiumatic is proportionality more effective than weapons A and B and can be converted into an ideal weapon for ground use. 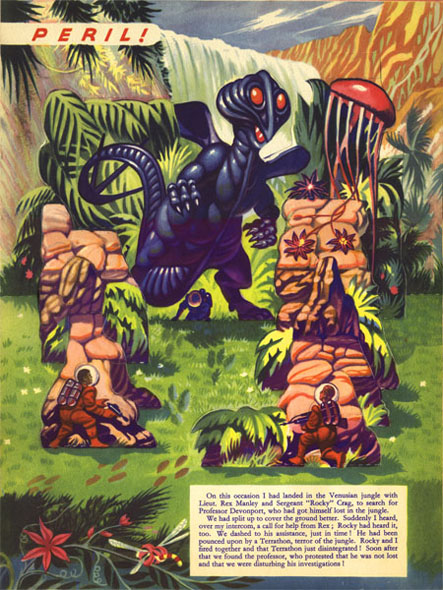 Peril in the Venusian jungle – A rescue operation results in the disintegration of a Terrathon and a safe return of fellow traveler, Professor Devonport. 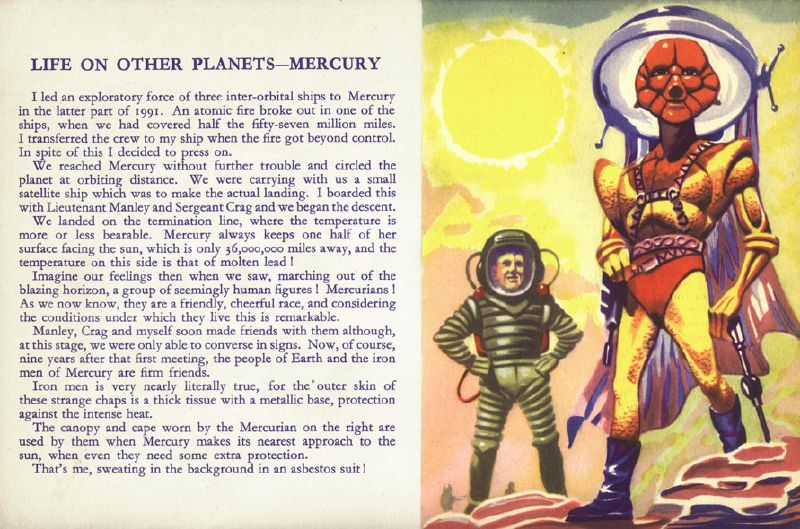 Humans and the Mercurians have become firm friends since the first meeting nine years ago. The Mercurians are referred to as ‘The Iron Men‘ as the outer skin of these strange chaps is a thick tissue with a metallic base, protection against the intense heat.

The canopy and cape worn by the Mercurian on the right are used by them when Mercury makes its nearest approach to the sun, when even they need some extra protection. 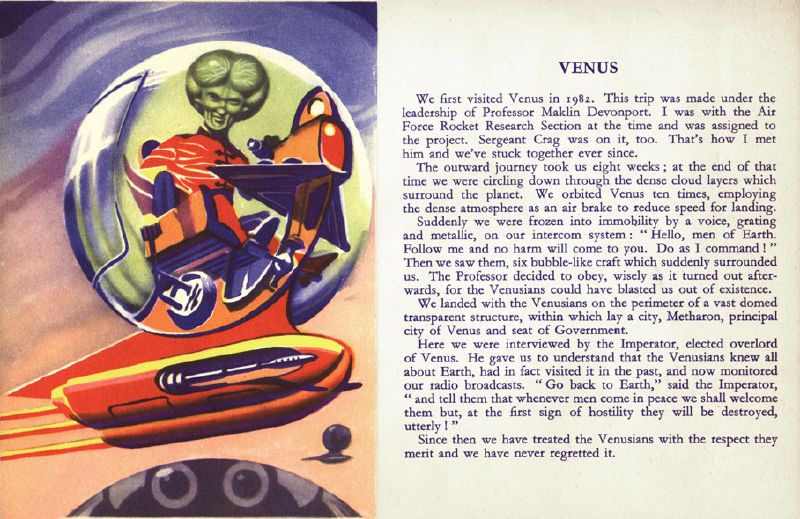 The Venusians are an advanced lot. As the ship descended to the planet it was frozen into immobility. A grating metallic voice came over the intercom, ‘Hello men of Earth. Follow me and no harm will come to you. Do as I command!’

Guided to the domed city of Metharon, a meeting was arranged with the elected overlord of Venus, The Imperator. The Imperator disclosed that the Venusians knew all about Earth, had in fact visited in the past, and now monitored Earth’s broadcasts. ‘Go Back to Earth,’ he said, ‘and tell them that whenever they come in peace we shall welcome them but, at the first sign of hostility they will be destroyed, utterly!’

Since then, the Venusians have been treated with the respect they merit. 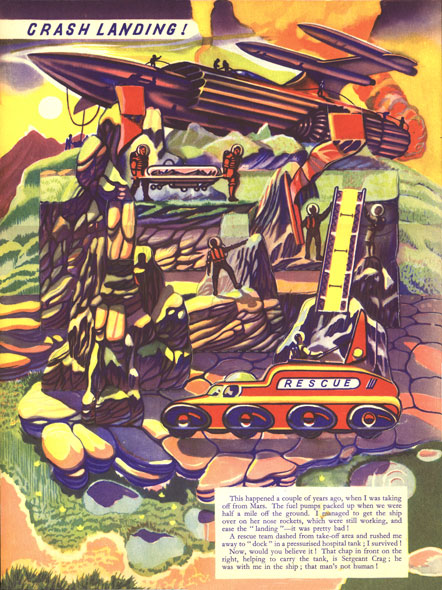 Crash Landing – Accidents happen. This particular emergency landing occurred on Mars. The rescue team that rushed to the crash site came from the take-off point bringing with them a pressurized hospital tank that saved a life. 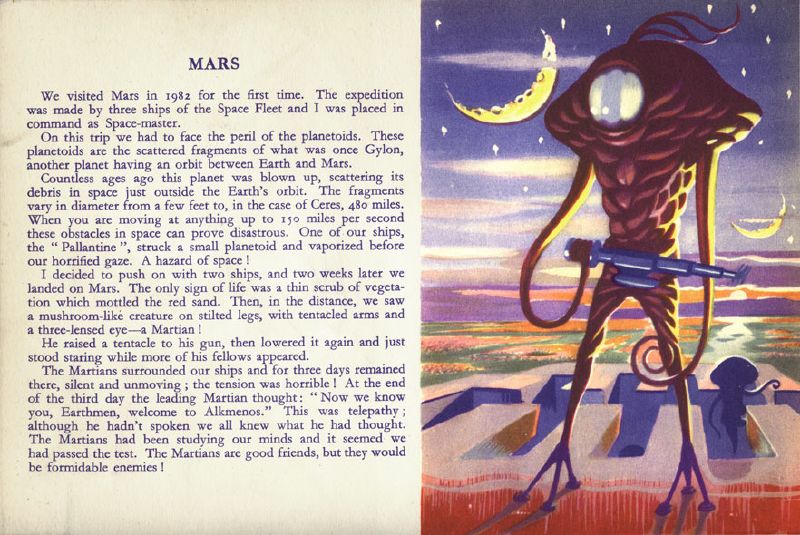 Mars is inhabited by these formidable creatures. They communicate telepathically. The first meeting with them was tense but they are now good friends. They refer to their planet as Alkmenos. 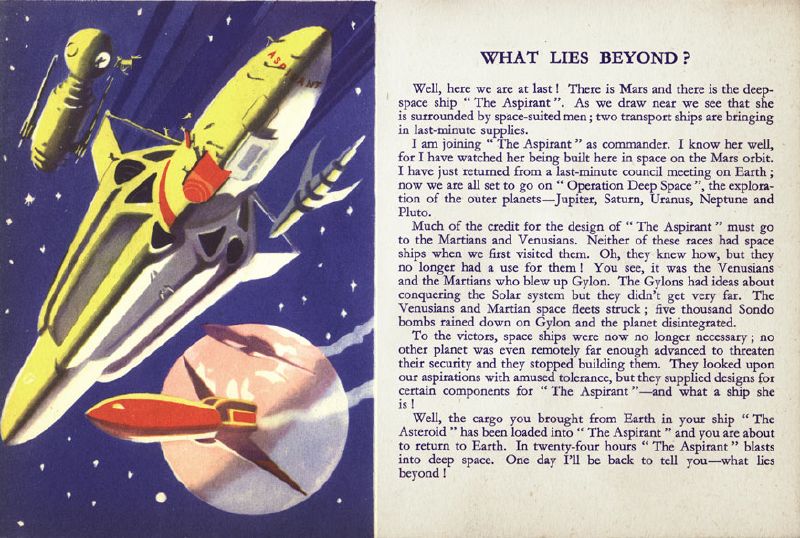 And there is The Aspirant. She’s surrounded by space-suited men and two transport ships are bringing in last-minute supplies. The Aspirant will be the ship used for ‘Operation Deep Space’ – an exploration of the outer planets – Jupiter, Saturn, Uranus, Neptune, and Pluto.

Much of the credit for the design of The Aspirant should go to the Venusians and Martians. They provided important component designs that helped make the ship into what it is.

Now that the supplies from The Asteroid have been loaded into The Aspirant it’s time to return to Earth. In twenty-four hours The Aspirant will blast off into deep space. One day we’ll be back to tell you — what lies beyond! 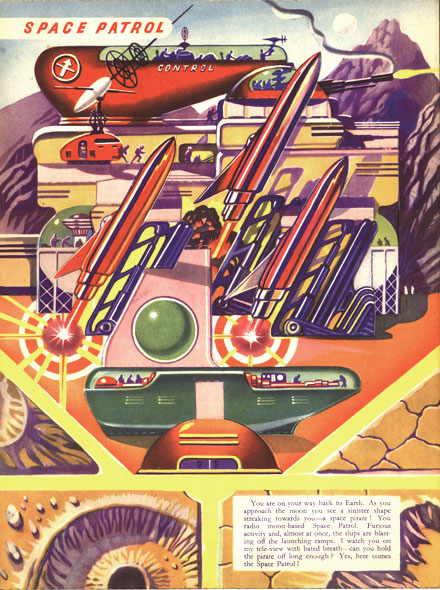 Passing the moon on the return to Earth a sinister shape is seen streaking toward the ship – a space pirate! A message is radioed to the moon-based Space Patrol. Furious activity and almost at once, the ships are blasting off the launching ramps. The Asteroid holds the pirates off long enough – here come the Space Patrol! 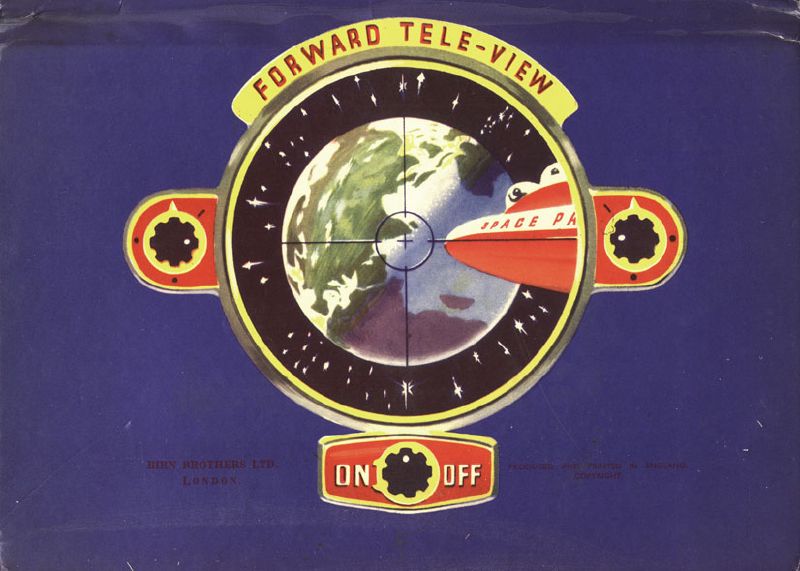 Images via The Ron Turner Collection

4 thoughts on “A Trip Into Space With Ace Brave!”